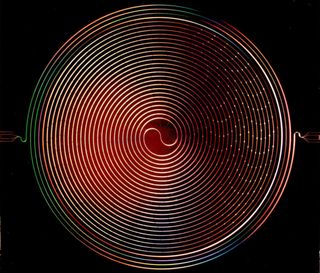 NASA wants to boost the signal coming from stars, galaxies and black holes while turning down the background noise. The U.S. space agency invented a new amplifier that can boost electrical signals from the universe and possibly help find the key to making quantum computers.

The amplifier design has superconductor materials that can conduct electricity without resistance at extremely cold temperatures. NASA's researchers used titanium nitride and niobium titanium nitride in their device to pump up the volume on weak electric signals — microwave signals, radio waves and X-rays from space.

"This amplifier will redefine what it is possible to measure," said Jonas Zmuidzinas, chief technologist at NASA's Jet Propulsion Laboratory and a physicist at the California Institute of Technology.

Transistor amplifiers found inside a car's speakers that boost faint or strong signals during quiet or loud parts of songs. But such amplifiers add too much background noise when they try to boost a weak signal from distant objects in space.

More sensitive parametric amplifiers can boost weak signals without the noise by adding the energy of a "pump signal." The downside for them is that they can't operate over a large frequency range and have a limited dynamic range.

NASA's new amplifier represents a much better parametric amplifier with 10 times more range and almost no background noise. Its frequency range goes from a few gigahertz to a terahertz (1,000 GHz) — a gigahertz being about 10 times greater than the FM radio signals broadcasted by U.S. stations.

The new amplifier could also reveal more about quantum mechanics — the strange behavior of particles on a small scale. Researchers have just begun constructing the most basic building blocks necessary for creating quantum computers that could crack today's most complicated codes in just a day.

"It's hard to predict what all of the applications are going to end up being, but a nearly perfect amplifier is a pretty handy thing to have in your bag of tricks," Zmuidzinas said.

The new paper by Zmuidzinas and his colleagues appeared in the July 8 issue of the journal Nature Physics.