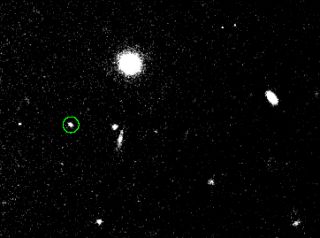 Astronomers have pinned down details of Jupiter's smallest known moon, a tiny space rock barely a mile across.

Scientists have kept observing the two satellites in the time since their initial detection, and a new study reveals key information about the moons and their orbits.

The new observations also confirm the diminuituve dimensions of the two satellites, which researchers determined based on their brightness.

"It was exciting to realize that this [S/2010 J 2] is the smallest moon in the solar system that was discovered and tracked from Earth," said co-author Mark Alexandersen, of the University of British Columbia, in a statement.

Jupiter is surrounded by a veritable cloud of moons, with about 50 primary moons that have official names and at least 14 smaller provisional moons that are known only by their number, according to a NASA description.

Scientists group the smaller, irregular satellites of giant planets such as Jupiter and Saturn in families with similar orbits and colors. These various families are believed to have formed when comets or asteroids smashed into larger moons long ago.

Jupiter's moons are a very diverse group, ranging from the tiny, irregularly shaped S/2010 J 1 and S/2010 J 2 to the huge Galilean satellites Io, Europa, Callisto and Ganymede. With a diameter of 3,273 miles (5,268 km), Ganymede is the biggest moon in the solar system; it's larger than the planet Mercury.

The new study, which details the discovery and tracking of S/2010 J 1 and S/2010 J 2, will appear this summer in The Astronomical Journal.