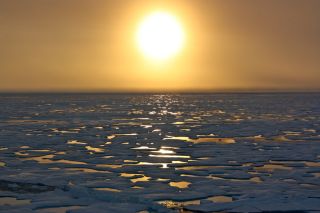 The sun sits low on the Arctic horizon during the NASA-sponsored ICESCAPE mission of 2011 as scientists on board the U.S. Coast Guard Cutter Healy headed south in the Chukchi Sea. The mission studies how changing conditions in the Arctic affect the ocean's chemistry and ecosystems.
(Image: © NASA/Kathryn Hansen)

The apparently barren ice of the Arctic can host huge bright green blooms of microscopic plantlike organisms underneath it — all hidden from satellites — suggesting that the Arctic Ocean is far more productive than previously thought, scientists with a NASA-sponsored expedition have found.

However, it remains unclear whether such fertility could have unexpected downsides for life in the Arctic, researchers said.

The single-celled organisms in question are known as phytoplankton, which possess the green pigment chlorophylljust as plants do, helping them live off sunlight. They are vital to life in the seas, serving as the basic food source for many ocean animals. Indeed, they are key to life on Earth — they account for about half of the total oxygen produced by all plant life.

"As someone who has been studying polar marine ecosystems for 25 years, I had always thought that the idea of under-ice phytoplankton blooms was nonsense," said researcher Kevin Arrigo, a biological oceanographer at Stanford University in California. "There is simply not enough light getting through the ice into the ocean for them to grow."

As it turns out, phytoplankton not only flourishes under thick layers of ice, but grows in numbers about four times higher under the ice than in the open water.

"The idea that phytoplankton can not only bloom under 3-foot-thick ice but that they can reach numbers that put their open-water counterparts to shame was a complete surprise," Arrigo told OurAmazingPlanet, a sister site of SPACE.com. "It means we have to rethink many of our ideas about how the Arctic Ocean ecosystems function."

Arrigo and his colleagues were in the Arctic on the ICESCAPE cruise — ICESCAPE standing for Impacts of Climate on EcoSystems and Chemistry of the Arctic Pacific Environment — to study how ocean life was responding to recent declines in sea ice levels. The expedition is sponsored by NASA and took place during the northern summers of 2010 and 2011.

"Part of NASA's mission is pioneering scientific discovery, and this is like finding the Amazon rainforest in the middle of the Mojave Desert," said Paula Bontempi, NASA's ocean biology and biogeochemistry program manager in Washington.

Simply reaching the research site was among the expedition's biggest hurdles, researchers said.

"Most of the difficulties in conducting the research were related to bashing through the ice to get to our study areas," Arrigo said. "In one instance, it took our icebreaker, the USCGC Healy, more than eight hours to go three ship lengths. We were surrounded by sea ice more than 15 feet [4.5 meters] thick and I thought we would never get out." [Images: Icebreaker in Action]

"As the ship moved from the open water into the ice pack, the instrument that tells us how much phytoplankton are in the water started to produce very high numbers," Arrigo said. "I thought this was odd since there shouldn't be phytoplankton under the ice. I actually feared that our instrument was malfunctioning."

They discovered a massive under-ice bloom that extended for more than 60 miles (100 kilometers) into the ice pack on the Chukchi Sea continental shelf. Based on their findings, productivity in the area they studied may be 10 times higher than current estimates of productivity there that are based solely on open-water measurements of Arctic phytoplankton.

"Our results show clearly that the Arctic Ocean is a much more biologically productive place than we previously thought," Arrigo said.

The reason that phytoplankton can flourish under the ice is because the Arctic ice pack has thinned in recent decades, riddling it with meltwater ponds at its surface. As such, "a lot more light can penetrate through the ice into the ocean below," Arrigo said. "It's not nearly as dim as it used to be."

Apparently, phytoplankton begins to grow beneath the Arctic ice in the late spring, as soon as there is ample light for photosynthesis. After a couple of weeks, the ice disappears and what is left is a remnant population of phytoplankton from that earlier under-ice bloom. The reason that relatively little phytoplankton is later seen in open waters is because most of the available nutrients were already consumed by their under-ice brethren. [6 Signs that Spring Has Sprung]

"Some have claimed that the bloom couldn't have developed under the ice — that it had to have begun in open water and drifted below the ice," Arrigo said. However, "given the currents and known ice motion, we have shown that this isn't possible."

Although one might assume that such productivity will be good for the Arctic, its specific impact remains unclear. For instance, phytoplankton blooms now seem to occur earlier than normal. Animals that fly or swim to the Arctic to depend on these blooms may have difficulty adjusting to an earlier season.

"It is often assumed that when it comes to biological food production, more is better," Arrigo said. "However, a more productive Arctic is not necessarily an improved Arctic or a better Arctic. If the Arctic becomes increasingly more productive, some members of the ecosystem will benefit while others will not. There will be both winners and losers. It's too early to tell who these winners and losers will be."

Now, researchers want to figure out how widespread under-ice blooms are and determine their impact on the polar marine ecosystems. However, "this will be difficult because the Arctic can be a pretty inhospitable place and sampling deep within the ice pack, which is what this research would require, is challenging, even for an icebreaker," Arrigo said.

The scientists detailed their findings online today (June 7) in the journal Science.

This story was provided by SPACE.com sister site OurAmazingPlanet. Follow OurAmazingPlanet for the latest in Earth science and exploration news on Twitter @OAPlanet. We're also on Facebook and Google+.