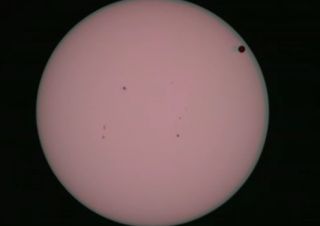 The transit of Venus has just begun, and already the first photos are coming in from skywatchers and scientists worldwide.

The planet Venus is making a rare pass in front of the sun today (June 5), providing a view from Earth that won't come around again until 2117.

Some early photos of the transit have arrived from observatories around the world trained on this special sight. Telescopes in Hawaii, Israel, Alaska, Norway, Japan and elsewhere are transmitting live feeds of their views via webcasts online. [Click here for live webcasts of the Venus transit]

Amateur skywatchers have also fanned out across the globe to catch the transit.

And, as expected, Twitter is abuzz with #VenusTransit posts, with some tweeting "sad faces" as their view of the small dot passing across the sun has been blocked by overcast. Others, meanwhile, are amazed.

Stay tuned with SPACE.com for more Venus transit photos as they come in!

Editor's Note: If you snap photos of the 2012 transit of Venus across the sun and would like to share them with SPACE.com, send images and comments to managing editor Tariq Malik at: tmalik@space.com.