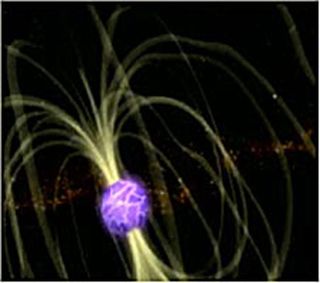 Astronomers have found the first evidence of cracks in aneutron star's crust. The star cracked when it was rocked by the strongest"starquake" ever recorded, researchers saidlast week.

Last December, astronomers worldwide monitored the explosionthat caused this starquake. The eruption was huge – in the first200 milliseconds of the event the star released energy equivalent to what ourSun produces in 250,000 years. The explosion was the brightest event everdetected outside of our Solar System.

Now scientists have used a collection of data from varioussatellites to provide the first observational evidence that the blast causedthe star to form cracks several miles long. Scientists hope these cracks willprovide a window into the mysterious interiors of neutron stars.

There are millions of neutron stars in the Milky Way galaxyalone, and some of these have magnetic fields trillions of times stronger thanEarth's, the strongest of which are called magnetars.

This particular magnetar – SGR1806-20 – is surrounded by the strongest magnetic field known in theuniverse. This could explain why the starquake– caused when the magnetar's crust could nolonger contain the magnetic stress building in the star's interior – wasso intense.

A magnetar's interior is a dense,liquid-like mix of neutrons, protons, and electrons – making it aterrific conductor of electricity. Because it has the characteristics of afluid, it moves around a lot. The magnetar's magneticfield loops around the star, and all this movement in the interior messes withthe field's shape, winding it up like you might do with a rubber band.

But the magnetar's exterior crust isnot so pliable. The crust is made mostly of iron. The magnetic field passesthrough it in places, which isn't a problem for normal neutron stars. But in magnetars, the field interacts with the core and shiftsaround erratically, causing crustal stress.Eventually, the stress reaches the point where the crust cracks.

"Imagine threading a rubber band between two cards, andthen twisting the middle," study leader Steve Schwartz of the ImperialCollege of London told SPACE.com."All those twisting stresses accumulate at the points where the rubberband threads through the card to the outside. Keep twisting long enough and youwill rip the card."

The first crack to form was three miles (five kilometers long)– significant since this magnetar is only sixmiles (10 kilometers) in diameter. Radiation spewed from this crack, causing asteep initial increase in detectable radiation.

But that was just the beginning. Radiation continued to spillout of the star, but at a much slower rate than the initial burst. Thissuggests that cracks continued to form.

"Whether this is a set of long, [three mile] cracks, or amultitude of much smaller ones isn't obvious to me," Schwartz said."My hunch is therefore: one big one, followed by lots and lots of ongoingsmaller ones."

What this means for SGR 1806-20 isn't clear, but it seems thatcracks form more to relieve pressure than as a sign that the star is blowingapart.

"The result of the cracking is to relax the interior andexterior field to a less twisted state," Schwartz said. "This hasvery little impact on the star itself, other than the fact that it will taketime to twist up the field again."

SGR 1806-20 is 50,000 light-years away, but the blast was so hugeit temporarily blinded some satellites and brieflyaltered Earth's upper atmosphere. A similar blast occurring within 10light-years of our planet would fry Earth's ozone layer. But don't worry– the closest magnetar is 13,000 light-yearsaway.

Two satellites designed to study the Earth's magnetosphere– the European Space Agency's Cluster and Double Star satellites –didn't go offline and recorded the entire event. Data from these two satelliteswas combined with observations from around the world to uncover the cracks.

So far, nine magnetars have beenfirmly identified, and four of these repeatedly emit bursts of X-rays and gammarays. SGR 1806-20, which has a magnetic field more powerful than any otherobject in the universe, is one of these so-called softgamma repeaters.

Researchers still don't know why SGR 1806-20's burst was soincredible, but they hope that a look into its cracks will help solve themystery.