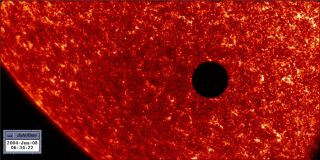 The last transit of Venus happened in 2004, as captured in this satellite image.
(Image: © NASA)

When Venus interposes itself directly between Earth and the sun for the last time in more than a century, national parks across America will be prepared to observe the historic event. Many will have special filtered telescopes set up for safe viewing of the sun, while rangers stand by to answer questions.

Every national park within the United States should be able to view the transit of Venus, either completely or in part, in the hours leading up to sunset on Tuesday, June 5.

The duration of the transit varies depending on how long before sunset it begins in a particular location. The eastern United States only has two prime hours to view Venus' rare trip before the sun goes down, while Hawaii and Alaska are primed to watch the entire six-and-a-half hour crossing.

Of course, you should never look directly at the sun, or stare at it through an unprotected telescope or camera. Many parks will have solar glasses available to allow visitors to safely observe the transit, and their telescopes will be specially outfitted with solar filters.

Where you can watch

At Great Basin National Park in Nevada, viewers will have about five hours to observe the rare astronomical event. And its wide expanse should provide excellent viewing opportunities.

"Other than the mountains to the west, you can see open sky – an amazing amount of sky," park employee Kevin Loscheider told OurAmazingPlanet.

He pointed out that the park tends to have good weather as well.

Great Basin will have talks about the transit of Venus starting at 2:30 p.m. MT. Several telescopes with the necessary solar filters will be set up at the visitor's center. The transit itself will begin around 3 p.m. MT and last until the sun sinks behind the mountains.

At the Grand Canyon, visitors will find a similar setup. Images of the transit will be projected onto laptops. Telescopes will be set up around the park so viewers can observe the transit from various points.

Haleakala National Park in Hawaii will be able to view the entire event from its summit. Filtered telescopes will be available to the public.

Once in a lifetime

The transit of Venus is a rare event that has only occurred 53 times since 2000 B.C. While the path of Venus takes it between the sun and the Earth roughly every year and a half, the planes of the two planets don't always line up. As such, sometimes Venus passes above the sun, and sometimes it dips below it, from the perspective of Earth.

After the June transit, the next crossing won't occur until December 2117, making this a once-in-a-lifetime viewing opportunity.

Those safely watching the event will view a small, black dot moving across the sun.

Loscheider expressed a hope that visitors who want to observe the transit from the Great Basin's grand expanse will stick around to see some of the parks other, earthly wonders. [8 Amazing National Park Structures]

"There's a lot of interesting things here: Nevada's only glacier, the [bristlestone] pine groves," he said. "A lot more to see than just the transit."

View the National Park Service's site on the transit of Venus for more information.

This story was provided by SPACE.com sister site OurAmazingPlanet.Get the latest in Earth science and exploration news on Twitter @OAPlanet and on Facebook.