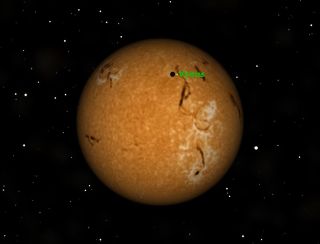 On Tuesday, June 5, skywatchers in North America will have their last chance to see Venus pass in front of the sun for over a century. Because of the International Date Line, this event will occur on Wednesday June 6 in Asia, Australia, Africa, and Europe.

This event, called a transit of Venus, is one of the rarest sights in astronomy. Transits of Venus occur in pairs 8 years apart, each pair separated from the next by over a century. The last pair occurred in 1881 and 1889, and the next pair will occur in 2117 and 2125. This week's transit is paired with a transit which occurred on June 8, 2004.

Why are transits of Venus so rare?

As the graphic associated with this guide shows, Venus' orbit is tilted by 3.4 degrees as compared to the Earth's orbit. As a result, most of the time Venus passes either above or below the sun when Venus is inferior conjunction with the sun (between the sun and Earth). Only when both Venus and Earth are at the points where the two orbits cross can we see Venus in front of the sun. [2004 Venus Transit: 51 Amazing Photos]

WARNING: It is always dangerous to stare directly at the sun!The sun's heat, when concentrated by your eye's lens on your eye's retina, can literally cook your sensitive retinal cells. The result can be a permanent blind spot in your eye. You only get one pair of eyes, so don't risk permanently damaging them.

One way is to block the sun's damaging rays with a dense filter. The only safe filters are a #14 welder's glass, sold only by specialized welder's supply stores, or "eclipse shades": special glasses available only from telescope stores and astronomy clubs. Either of these cost less than a couple of dollars, so there's no excuse to endanger your eyes.

The only other safe way to observe the sun is with a "pinhole camera."

This can be made from a large cardboard box, such as a mover's "two-cube." Make a small hole in one end of the box, about a millimeter or two in diameter, which acts as the "lens," and place a white sheet of paper in the opposite end to serve as the viewing screen. Place the box over your head resting on your shoulders, and watch the transit on the screen. [Video: How to Make a Pinhole Camera]

Much simpler pinhole cameras can be improvised from any object with a small hole, but the advantage of using a large box is that it keeps stray light off the screen, allowing you to use a smaller pinhole, for a sharper image.

If you're observing with binoculars or a small telescope, there is no substitute for a proper full-aperture solar filter. Unless you block the sunlight from entering the telescope, you run the risk of concentrating the sun's light.

It was once common for solar observers to use their telescopes to project an image of the sun with an eyepiece. That was in the days when telescopes were made of metal and glass. Nowadays there is much plastic, and even cardboard, used in making telescopes and eyepieces, so that you run the risk of "meltdown" or even fire. It's just not safe.

So, when is the best time to observe the transit?

In North America the best time will be in the hours before sunset on Tuesday afternoon. In Europe, Africa, and Australia, Venus will be in transit as the sun rises on Wednesday morning (June 6). In most of Asia and across the Pacific Ocean, any time during Wednesday should work. Detailed times are shown in the table accompanying this guide.

For most observers, Venus will be a tiny round black disk, but large enough to be clearly visible with the unaided eye, properly protected by eclipse glasses or welder's glass. If you're viewing with a telescope, the most interesting times will be as Venus is entering or leaving the sun's disk.

One of the things to look for is the so-called "black drop" effect.

Here's an example: Hold up your thumb and forefinger in front of a bright background so that they are almost touching. You will see an interesting optical illusion whereby a black ligament appears to bridge the gap.

For the Venus transit, a similar illusion occurs just after second contact and just before third contact, when a dark ligament appears to join Venus to the dark sky. But is this entirely an optical illusion? Remember that Venus has a dense atmosphere which could contribute to this effect.

Many observers have reported seeing Venus as a bright ring just before it enters the sun's disk and just after it leaves. Mikhail Lomonosov, who organized the observations of the transits in the 1760s, correctly deduced from this that Venus had an atmosphere, illuminated from behind by the sun.

One difference between this transit and the one eight years ago is that many amateur astronomers now have telescopes which allow them to view the sun in hydrogen alpha light. It should be possible to see Venus silhouetted against prominences and the corona, before it moves in front of the chromosphere.

These are just a few of the interesting things which may be visible next Tuesday (or Wednesday, depending on your location). May you have clear skies, and don't forget to send us your images.

If you snap photos of the 2012 transit of Venus across the sun and would like to share them with SPACE.com, send images and comments to managing editor Tariq Malik at: tmalik@space.com.