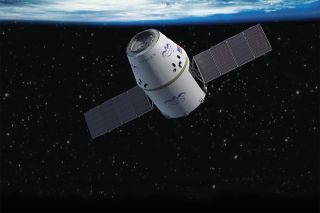 A new private spaceship is set to join the suite of automated cargo freighters that bring essential supplies to the International Space Station.

The commercial aerospace firm SpaceX (Space Exploration Technologies of Hawthorne, Calif.) is set to launch its Dragon space capsule to the orbiting outpost for the first time Tuesday (May 22). The vehicle has made one test flight before, in 2010, but this will be the first time a non-government vehicle links up with the space station.

So far, a handful of robotic supply spaceships have been servicing the laboratory, including entries from Russia, Europe and Japan. The United States' space shuttle used to do the bulk of the heavy lifting, but now those vehicles are retired.

To fill the gap, NASA is hoping SpaceX's Dragon, as well as another commercial cargo freighter called Cygnus from Virginia-based Orbital Sciences Corp., are up to snuff.

Here's a rundown of the existing cargo spaceships:

Russia's Progress spacecraft are the workhorses of the supply ship fleet. More than 30 of these expendable vehicles have launched from the Baikonur Cosmodrome in Kazakhstan to dock at the space station.

These ships can carry 5,200 pounds (2,350 kilograms) of food, supplies and science equipment for use on the orbiting lab. After they are unloaded, crewmembers pack them full of trash and send them back toward Earth, where they burn up as they re-enter the planet's atmosphere.

The European Space Agency's Automated Transfer Vehicles (ATVs) are another series of ships designed to deliver goods to the International Space Station. These vehicles have three times the carrying capacity of Russia's Progress (17,600 lbs, or 8,000 kg), and like the Progress, they burn up during re-entry. [Photos: Europe's ATV Space Cargo Ships]

Starting in March 2008, three ATVs have launched to the station so far, with a total of five planned to launch through 2014. The three flown ships have been named "Jules Verne," "Johannes Kepler," and "Edoardo Amaldi," after famous European scientists. The ATVs carry food, water, fuel and other supplies for the outpost.

Japan's entry to the cargo ship arena is called the H-2Transfer Vehicle (HTV), or Kounotori, which means "white stork" in Japanese. Its payload capacity is 13,000 lbs (6,000 kilograms), midway between that of the Progress and the ATV.

Two HTVs have been sent to the station so far, with five more planned through 2015. The first of these vehicles launched in September 2009. Similar to both the Progress and the ATV, these vehicles from the Japan Aerospace Exploration Agency launch unmanned and are destroyed when they fly back through the atmosphere.