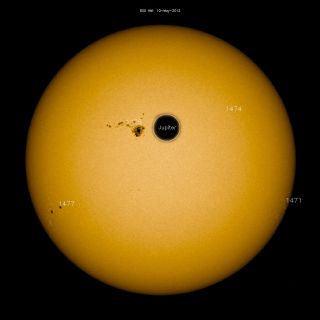 The flare erupted from monster sunspot complex AR 1476, which stretches about 60,000 miles (100,000 kilometers) from end to end, at 9:47 p.m. EDT Wednesday (0147 GMT Thursday). The flare spawned a class S2 solar radiation storm around our planet, according to the Space Weather Prediction Center (SWPC), a branch of the U.S. National Oceanic and Atmospheric Adminstration.

An SWPC description classifies S2 solar radiation storms as moderate, with the potential to cause infrequent "single-event upsets" in Earth-orbiting satellites. People aboard aircraft flying at high latitudes may also be exposed to elevated radiation levels during such events.

The flare also caused limited radio blackouts on the sunlit side of Earth, SWPC researchers said, adding that the radiation storm appears to be subsiding.

Sunspot group AR 1476 was detected by space telescopes on May 5, and it fired off numerous C and M flares over the following days. It had been relatively quiet for a while, researchers said, until Wednesday night's eruption.

At the moment, however, Earth doesn't seem to be in danger of a CME impact from last night's eruption.

"If a CME was launched, it is likely to be off-line with Earth given the far western site of the event," SWPC researchers wrote in an update Thursday.