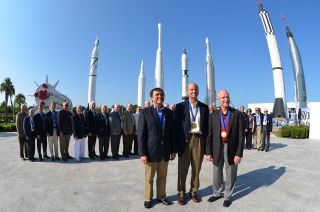 KENNEDY SPACE CENTER, Fla. — The U.S. Astronaut Hall of Fame welcomed three new space travelers into its ranks Saturday (May 5), honoring a spacewalker who tied the record for the most space missions, the military's highest ranking astronaut, and a former chief of the NASA astronaut corps.

Franklin Chang Diaz, Kevin Chilton and Charles Precourt, the Hall of Fame's 11th class of space shuttle astronauts and the first to be inducted after the 30-year program had come to its end, were enshrined during a public ceremony held at NASA's Kennedy Space Center Visitor Complex in Florida, which includes the Hall of Fame.

The shuttle veterans raised the number of honorees in the Hall of Fame to 81 astronauts, including all the Mercury, Gemini and Apollo pioneers. More than two dozen of the previous years' inductees, including Apollo 13 commander Jim Lovell, first shuttle pilot Bob Crippen and spacewalker Kathy Thornton filled three rows of seats at the ceremony to celebrate Chang Diaz, Chilton and Precourt.

"It's just such a tremendous honor to be recognized by the folks who are recognizing us today, people who I grew up admiring here in the first two rows and in the back row, folks who I call colleagues and friends," said Chilton, who retired last year from the Air Force as a four-star general, the highest rank ever attained by an astronaut.

To have been eligible for induction in 2012, the astronauts needed to have made their first space mission in 1994 or earlier. They also had to be retired from flight status as a NASA commander, pilot or mission specialist for at least five years, be a U.S. citizen; and have orbited the Earth at least once. [7 Notable Space Shuttle Astronauts]

All three new inductees told collectSPACE.com that the Hall of Fame's earlier honorees were their personal heroes.

"It is just so flattering and humbling. Just looking at a list of folks who have been inducted and you look at that and see yourself on that list and you're like, 'Oh, that doesn't look right,'" Chilton, a veteran of three shuttle flights, said in an interview.

"It's a real thrill, to be a part of such a long string of great American heroes of the space program," said Precourt, who was chief of the astronaut corps as the International Space Station was "born" in 1998. "I find it very humbling to be among them."

"I receive this honor with a great deal of humility because it is given to me by those who were always my heroes," Chang Diaz, a record seven-mission shuttle veteran, said. "To be recognized by those who you admire is even more powerful than to be just recognized at all."

Three of the 2012 honorees' crewmates, each members of the Hall of Fame, inducted their former colleagues during the ceremony. George "Pinky" Nelson, who flew on Chang Diaz's first mission, STS-51C; Daniel Brandenstein, who flew with Chilton on the 1992 maiden mission of shuttle Endeavour; and Robert "Hoot" Gibson, who with Precourt performed the first shuttle docking with the Russian space station Mir in 1995, did the honors.

Done, but not over

As the three new shuttle veterans entered the Astronaut Hall of Fame, the winged spacecraft they flew were being inducted into their own museums.

"We shed a few tears as Discovery, the first of our space shuttles — and yes, we'll always feel like they belong here no matter where their homes are — made her sunrise departure on April 7 on a Boeing 747, circling the rocket garden in its final farewell," Bill Moore, Kennedy Space Center Visitor Complex chief operating officer, said during the ceremony. "Soon, Endeavour will follow her." [10 Cool Facts About Shuttle Discovery]

"But from those difficult goodbyes comes an even bigger welcome home, as we prepare just across the Visitor Complex to give Atlantis the most incredible home, other than space, that an orbiter has ever known," Moore said.

Between them, Chang Diaz, Chilton and Precourt flew 13 space shuttle missions, all but two aboard the remaining orbiters Discovery, Endeavour and Atlantis.

"I don't think the program will ever feel over," Precourt told collectSPACE.com, reflecting on the end of the 30-year shuttle program last year. "It was such a powerful and emotional part of what we are as a country."

"It will always be a part of us, and yeah, I wish we could keep flying, but the reality is we've got to build something else," Precourt said, adding that he was confident the new vehicle, whatever it will be, would follow soon.

The inductees toured Atlantis and Endeavour the morning before the induction ceremony where the two orbiters were being prepared for their museum displays.

"It is definitely a sense of nostalgia and sadness to see such a wonderful program come to a close," Chang Diaz said. "I always see this as perhaps this wasn't the perfect ending and perhaps this is not the right time to do it, but it has to happen. It means that we need to open a new chapter that ought to be even more exciting, something that we can bring to our young people as a perspective for our future."

"I think the prospects for our future is tremendous," said Chang Diaz, whose company is designing an engine that in theory could propel a crewed rocket to Mars in 39 days.

"In spite of what some of you may have heard, the ending of the shuttle program has not ended human spaceflight," Cabana said during the ceremony.