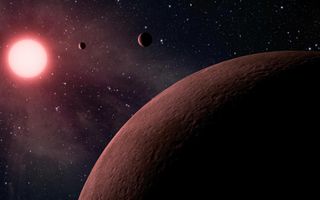 In this space wallpaper, three planets whip around a star in less than two days, with the closest planet taking less than half a day. Astronomers using data from NASA's Kepler mission and ground-based telescopes recently confirmed that the system, called KOI-961, hosts the three smallest exoplanets known so far to orbit a star other than our sun. An exoplanet is a planet that resides outside of our solar system. The star, which is located about 130 light-years away in the Cygnus constellation, is what's called a red dwarf. It's one-sixth the size of the sun, or just 70 percent bigger than Jupiter. The star is also cooler than our sun, and gives off more red light than yellow. The smallest of the three planets, called KOI-961.03, is actually located the farthest from the star, and is pictured in the foreground. This planet is about the same size as Mars, with a radius only 0.57 times that of Earth. The next planet to the upper right is KOI-961.01, which is 0.78 times the radius of Earth. The planet closest to the star is KOI-961.02, with a radius 0.73 times the Earth's.