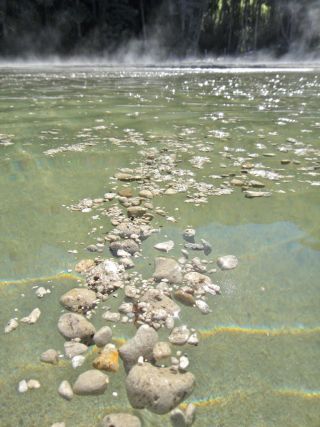 Volcanoes bring death and destruction, but out of the ashes life soon finds fertile ground. A unique experiment is sifting through floating debris from an ongoing volcanic event to see how microbes move in.

The results may help in assessing a recent hypothesis that the first life forms may have found fertile ground in the pores of volcanic rocks.

James Elser of Arizona State University wasn't planning to study volcanic debris when he developed his plans for some ecological field work in northern Patagonia. But on June 4 of last year, the nearby Puyehue-Cordón Caulle volcano erupted.

"That threw all my original plans in the waste basket," Elser says.

The entire region was covered in ash and small porous rocks called pumice. Some of this debris ended up in the nearby lakes, where the floating pumice collected at the surface in thick sheets. Elser realized he might make "lemonade" with the lemons he got dealt.

Pumice has long been of interest to biologists as a possible means to ferry animals and plants across water barriers. "Islands" of pumice – sometimes many kilometers across – can float across long distances of ocean, presumably helping to seed remote islands with new life forms. [7 Theories on the Origin of Life]

More recently, pumice has garnered a more fundamental interest as a possible substrate for the origin of life.

"It has the most surface area of any rock, and it can develop a unique chemistry inside its pores," says Martin Brasier of the University of Oxford.

Although geologists have well-characterized pumice, not much direct biological work has been done with this volcanic rock. Circumstances as they were, Elser decided to study the way microbial life colonizes "pristine" pumice real estate.

With funding from NASA's Astrobiology Institute, he and his colleagues have been collecting samples from the Argentine lakes that surround Puyehue-Cordón Caulle. In the months to come the team will be analyzing which microbes inhabit the pumice and how they obtain nutrients.

Pumice forms when lava from a volcano cools rapidly. Trapped gas in the hardening lava creates pores that can constitute more than half of the volume.  The rocks, which are typically made of silica, range in size from millimeter-sized grains to large pebbles that are several centimeters across.

The porous nature of pumice explains why it is the only rock that floats. The material looks and acts like a sponge, soaking up material dissolved in the water. (Pumice is often used to clean wastewater).

In the Argentine lakes, the floating pumice layers can be 20 to 30 centimeters thick. "It's like wading around in cement," explains Elser.

For microbes trying to make a new home on the pumice, the going can be tough. Nutrients, especially nitrogen and phosphorus, are hard to come by. Rocks floating near the surface will get a piercing blow of UV from the Sun, whereas rocks down below will get almost no light at all.

To see which organisms can survive in this harsh environment, Elser and his collaborators have been fishing out samples from the pumice-filled waters. Preliminary analysis shows that the pumice inhabitants include a mix of photosynthesizing organisms and other higher links in the microbial food chain.

A more thorough examination will be done with Ion Torrent, which is a next generation DNA sequencing technology. This relatively inexpensive technique can't identify individual species, but it will be able to extract information about the higher-level diversity of life forms that have colonized the pumice.

"We will be able to see if the community structure is the same as the lake or if the microbes on the pumice are a distinct collection of organisms," Elser says.

The biologists will also be looking at nutrient absorption by the pumice colonists. By exposing pumice to stable isotopic forms of nitrogen and phosphates, they will be able to characterize the way that these essential nutrients make their way into the pumice eco-system.

The main significance of this work is not so much how current life makes pumice its home, but how ancient life may have.

"Volcanic events have been a part of Earth history for a long time," Elser says. And there is evidence of floating pumice from 3.5 billions of years ago.

The astrobiological interest of pumice is that its nooks and crannies may have served as the first organic chemistry laboratory.

"It's a blue-sky idea for me," remarks Brasier. He and his colleagues recently proposed that floating pumice rocks could have been host to the origin of life. In a 2011 paper for the journal Astrobiology, they claim that pumice has several interesting properties that make it ideal for getting biochemistry going.

"Pumice is highly reactive," Brasier says. Its large internal surface area works as a substrate for a large variety of chemical reactions. Moreover, its absorption properties could allow it to soak up several biological building blocks and catalysts and concentrate them in a small volume.

And since pumice floats, it could carry important volcanic minerals away from underwater hydrothermal vents. Brasier suspects pumice-lined beaches could provide a long-lasting, thermally-stable environment for abiotic chemistry to occur.

Brasier is working now with Mark Sephton, an experimentalist at Imperial College London, in order to study how pumice takes up minerals. Neither of them are involved with Elser's project in the Argentine lakes, but Brasier thinks this ongoing study is a "lovely opportunity" to examine pumice in a natural setting.

"Pumice looks promising for the origin of life, but we need a whole series of observations to begin to examine its role," Brasier says.