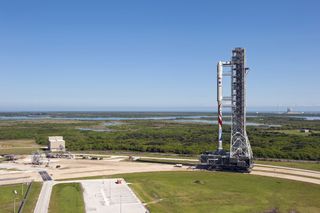 To help spur the development of a new fleet of commercial spacecraft to carry astronauts to and from the International Space Station, NASA has partnered with select private companies to foster the design and testing of the new vehicles. But the firms that received funding from NASA are not the only players in the game.

NASA has also made deals with several other commercial companies under so-called unfunded Space Act Agreements. As part of these arrangements, the agency provides expertise that could help the companies develop their vehicles or launch systems, but does not give out any money.

Utah-based Alliant Techsystems (ATK), the company that manufactured the space shuttles' solid rocket boosters, signed an unfunded Space Act Agreement (SAA) with NASA in September to jointly work on the company's Liberty rocket, which could launch astronauts into orbit by 2015 or 2016, company officials have said.

Also in September, ATK completed a full-scale test of its five-segment solid motor — the world's largest solid rocket motor — in Utah's high desert. The motor was originally designed to be the first stage of the Ares 1 rocket, which NASA planned to use to launch the Orion capsule on trips to the moon before the Constellation program was scrapped.

"With the SAA in place, we have been able to work closely with NASA's Commercial Program and receive valuable feedback as we develop the Liberty System," said Kent Rominger, ATK vice president and program manager for Liberty. "We continued to develop Liberty with the goal of providing the safest, most reliable, cost-effective and capable system for crew transport."

ATK is building Liberty in partnership with the European aerospace firm Astrium. The rocket will use the original Ares 1 engine as a first stage, and Astrium's Ariane 5 rocket as the second stage. The rocket will tower at 300 feet (91 meters) tall, company officials have said.

An initial design review for the launch system was completed in January, Rominger said, which brought together representatives from ATK, Astrium and other subcontractors. [The World's Tallest Rockets: How They Stack Up]

Libertywas submitted for consideration in the second round of NASA's Commercial Crew Development program last year, but it was not selected to receive funding.

But the company's Space Act Agreement with NASA, which runs through the spring, and stipulates that 12 to 24 full-time agency employees will help assess the design of Liberty, demonstrates NASA's continued interest in the project, Ed Mango, NASA's commercial crew program manager, said at the time.

ATK has submitted a proposal for the third and final funded phase of NASA's commercial crew program, called Commercial Crew integrated Capability, or CCiCap. For proposals in this stage of the competition, companies are expected to present a complete launch system —rocket and vehicle — for consideration. ATK has not discussed specific details of their proposal, but company officials have said that work on the Liberty system is making steady progress.

"The program is on schedule and we'll discuss more of our plans before the awards are made," Rominger told SPACE.com in an email. NASA is expected to announce their CCiCap selections this summer.

In late May, ATK is expected to conduct a structural test of the upper stage tank, followed by an analysis of the system's software in June, he added.

With NASA's space shuttle fleet now retired, the Liberty system is aiming to provide a flexible and cost- effective way to carry astronauts to the International Space Station.

"Because of the near-term schedule, low cost and high performance we can carry any spacecraft, have payload margin to also carry substantial cargo and return down-mass cargo," Rominger said.

Using existing technology and infrastructure has also benefitted the program, and could help the process to man-rate the launch system go smoothly.

"Using qualified, proven and reliable systems is one of the major strengths of the program," Rominger said. "Liberty provides tremendous value because it builds on European Ariane 5 launcher heritage, while allowing NASA to leverage the mature first stage. Both stages were also designed for human-rating since inception and would enable unmatched crew safety. In addition, we will launch it from the Kennedy Space Center using facilities that have already been built."

But ATK and Astrium are not alone.

Excalibur Almaz, a private spaceflight company based on the Isle of Man, is working on repurposing space-flown hardware that was developed by the former Soviet Union. Company officials have said this approach will help cut costs and time during the development phase.

NASA announced it was entering into an unfunded Space Act Agreement with Excalibur Almaz in October.