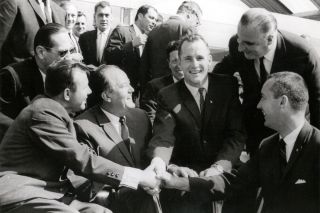 The first meeting between Gagarin and the Gemini 4 astronauts.
(Image: © NASA)

In this historical photo from the U.S. space agency, Soviet cosmonaut Yuri Gagarin, the first human in space, shakes hand with NASA's Gemini 4 astronauts, Edward H. White II and James A. McDivitt at the Paris International Air Show on June 19, 1965. Gagarin was a character. Just moments before his historic flight on April 12, 1961, he joked about having enough sausages and moonshine to make the trip home to Moscow after landing. [Infographic: How the First Human Spaceflight Worked]

This first meeting between Gagarin and the Gemini 4 astronauts occurred shortly after the completion of the Gemini 4 mission, where White performed the first American spacewalk. Also shown in the picture (seated) are Vice President Hubert H. Humphrey and (standing) French Premier Georges Pompidou.