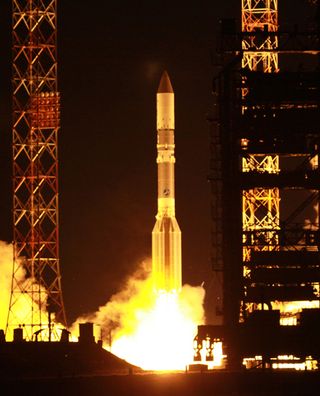 Both spacecraft were built by Astrium Satellites and Thales Alenia Space of Europe under a $1.66 billion contract that included the satellites’ launch and the network ground infrastructure. Astrium Services, which is Astrium’s service-provision arm and is overall prime contractor for the Yahsat system, will operate the two satellites with Thales Communication and Security for five years and provide training to Emirati personnel under the contract. [Amazing Russian Rocket Launch Photos]

YahSecure features a regional beam centered on Yahsat’s region. A global beam offers Ka-band to Southern, Central and Eastern Europe, all of Africa, and a large swath covering Central and South Asia, including India, and eastward including most of China and Southeast Asia.

The Ka-band service will also be allocated through 61 narrow spot beams.

The Yahsat 1B launch, from Russia’s Baikonur Cosmodrome in Kazakhstan, was followed by a cruise phase of the Proton’s Breeze M upper stage lasting nine hours and 12 minutes and including five engine ignitions before the 6,000-kilogram Yahsat 1B was released into orbit.

The launch was the third of 2012 for Reston, Va.-based ILS, and the fourth Proton rocket launch of the year. One of the Proton missions lofted a Russian government satellite.