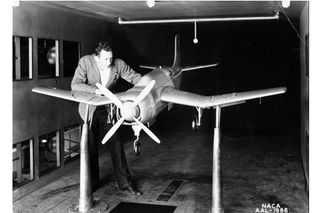 In this historical photo from the U.S. space agency, a scale model of an airplane is prepared for study in one of the 7 x 10-foot wind tunnels at the Ames Aeronautical Laboratory, on April 1, 1942. Now called the Ames Research Center, the facility now has an 11 x 11-foot wind tunnel that can simulate speeds up to Mach 1.45.

The Ames Aeronautical Laboratory was the second laboratory of the National Advisory Committee on Aeronautics (NACA), a precursor to NASA. The NACA was created by act of Congress on March 3, 1915 and charged with the development of aeronautical research and testing facilities to improve both civil and military aviation.