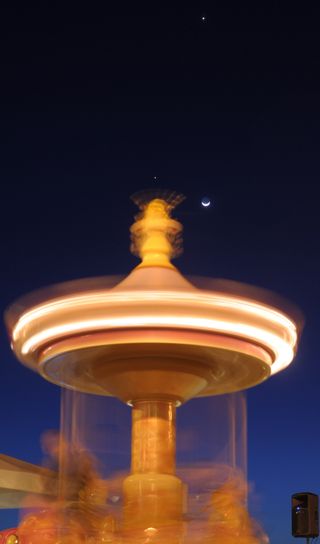 On Tuesday evening (April 24), skywatchers will be treated to yet another eye-catching celestial tableau as a lovely crescent moon slides past the brightest of all the planets: the dazzling Venus.

Venus continues to draw all eyes to the western sky after sunset. Observers have been watching the bright planet for many weeks, although it seems that a fairly large percentage is not quite sure exactly what they have been looking at. I take phone inquiries from the general public on behalf of New York's Hayden Planetarium and questions regarding Venus have increased noticeably in recent days.

"I've been seeing this 'huge, white star' shining in the west after the sun has gone down for a number of nights. I suspect it might be a planet, but some have told me it might be a satellite … maybe even a space station. I would really appreciate if you could tell me what I've been looking at."

Venus is so bright you can see it even in broad daylight, but you have to search just the right spot in a deep-blue sky. After nightfall at a really dark site, the planet can even cast shadows. In fact, Venus is so bright that in January 2011, an Air Canada pilot mistook the planet for another airplane and sent his passenger jet into an emergency dive to avoid a potential collision! [Amazing Skywatching Photos of Venus and Jupiter]

How to see Venus

Venus is the first star-like object to appear at dusk and about 45 minutes after sunset it is indeed truly dazzling. The planet is currently shining at its greatest brilliancy, a magnitude of -4.5 on the scale used by astronomer to measure the brightness of sky objects.

On this magnitude scale, the smaller the number the brighter the object so Venus' negative number of -4.5 makes it exceptionally dazzling.

Venus will remain just as bright for all practical purposes (within a tenth of a magnitude) right on through May 17. It only seems appropriate for a planet named for the goddess of love to be showiest in northern springtime, and brightest of all around the ancient fertility festival of May Day.

The moon-Venus get together on Tuesday will not be an exceptionally close one. In fact there will be a rather wide gap separating the two brightest objects of the night sky; they will appear be roughly 6 to 7 degrees apart, Venus appearing to loom high above and to the right of the skinny moon. (Your clenched fist held at arm’s length measures about 10 degrees, so the moon and Venus will be separated by about two-thirds of a fist.)

But while the moon and Venus will be far apart, they will likely attract the attention of even casual skywatchers who normally wouldn’t pay much attention to things going on up in the sky wherever it is reasonably clear.

The moon will be 12 percent illuminated and will be rather far from Earth, having just passed apogee — the farthest point in its orbit — on Sunday. When they appear together on Tuesday, the moon will be about 251,000 miles (404,000 kilometers) away. Nonetheless, this is still much closer than Venus, which at that same time will be nearly 181 times more distant.

Bright as Venus may be, it has also begun its plunge down the sky toward the sun.

Right now, the planet remains up for two hours after it fully gets dark. But by May 21, Venus will be setting prior to the end of evening twilight and just ten days later it will be setting less than 45 minutes after sunset.

What is happening in space is that Venus is "rounding the bend" on the near side of its orbit to us. This puts it ever closer to the sun-Earth line and causes the planet's outline to loom bigger while the sunlit part facing our way grows ever thinner.

Keep in mind that this stupendously bright evening star will continue "falling" until it passes directly between the sun and Earth on June 5 in the 2012 Venus Transit — the last such transit of Venus until the year 2117.

If you snap an amazing photo of Venus and the moon, or any other skywatching target, and you'd like to share it for a possible story or gallery, please contact managing editor Tariq Malik at tmalik@space.com.