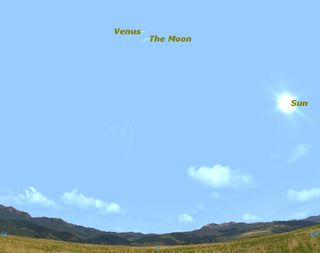 This sky map shows how to spot Venus in daylight on Monday, March 26, 2012. WARNING: Never look directly at the sun with your unaided eye or through binoculars or telescopes without special light filters. Severe eye damage can result.
(Image: © Starry Night Software)

The planet Venus has been dominating the nighttime sky recently, but did you know it's possible to see the bright world in the daytime? Today (March 26), Venus can be spotted in the afternoon if you know where and when to look.

In fact, a daytime apparition of Venus in the sky was famously spotted by none other than President Abraham Lincoln in 1865.

It was March 4, 1865, and the streets of Washington DC were packed with crowds watching the inauguration ofAbraham Lincoln for his second term as president. Suddenly someone in the crowd spotted something strange in the sky: a tiny brilliant point of light. Excitement swelled through the crowd as each person pointed it out to their neighbor. The commotion even reached as far as the Lincoln himself, and soon he too was pointing at the brilliant point in the sky.

One of Lincoln's bodyguards, Sergeant Smith Stimmellater, described it this way: "Soon after the President concluded his address, he entered his carriage, and the procession started up Pennsylvania Avenue to the White House, the escort from our Company following next to his carriage. Shortly after we turned onto Pennsylvania Avenue, west of the Capitol, I noticed the crowd along the street looking intently, and some were pointing to something in the heavens toward the south. [Great Skywatcher Photos of Venus and Jupiter]

"I glanced up in that direction, and there in plain view, shining out in all her star-like beauty, was the planet Venus. It was a little after midday at the time I saw it, possibly near one o'clock; the sun seemed to be a little west of the median, the star a little east. It was a strange sight. I never saw a star at that time in the day before or since. The superstitious had had many strange notions about it, but of course it was simply owing to the peculiarly clear condition of the atmosphere and the favorable position of the planet at that time. The President and those who were with him in the carriage noticed the star at the same time."

This week, nearly a century and a half later, you can duplicate this famous observation. The sky map of Venus in daylight for this story shows where Venus and the moon will appear at 4 p.m. relative to the sun.

Here's how to see it:

Go out around 4 p.m. local time on Monday, and position yourself so that the sun is behind a chimney or rooftop to your right. Blocking the sun is always essential if you're looking anywhere close to the sun. WARNING: Never look directly at the sun with your unaided eye or through binoculars or telescopes without special light filters. Severe eye damage can result.

Venus is not the only object currently shining bright in the evening and nighttime sky. Tonight, Venus will appear near the moon and Jupiter for the second night in a row in an event that astronomers call a conjunction.

At sunset tonight, Venus will appear in the west just to the right of the crescent moon with Jupiter shining below. In the eastern night sky, Mars is also currently visible at night and is unmistakeable due to its reddish hue.