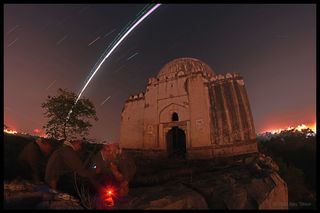 A plane leaves a colorful trail in this image of the night sky from Mughal king Akbar's tomb outside New Delhi.
(Image: © Ajay Talwar)

An ancient resting site provides a somber backdrop for this stunning skywatcher image. The image was taken by astrophotographer Ajay Talwar from New Delhi, India in front of the tomb of Akbar Khan in early 2012.

In the image, the trail of stars and the bright pink trail left by a passing plane can be seen in the image, which Talwar created on Jan. 18. The plane crossed in front of the bright stars of Orion. Also dubbed the Hunter, this constellation is visible across the world and is one of the most recognized star formations in space. Several bright stars such as Betelgeuse, Rigel and Bellatrix are located in this constellation.

Photographing such an image is no easy feat because light pollution in the city makes it difficult to clearly view the night sky. According to his website, Talwar hopes to photograph the skies from other famous sites in India including the deserts of the northwest, mountains in the far north and even from the majestic Himalayas.