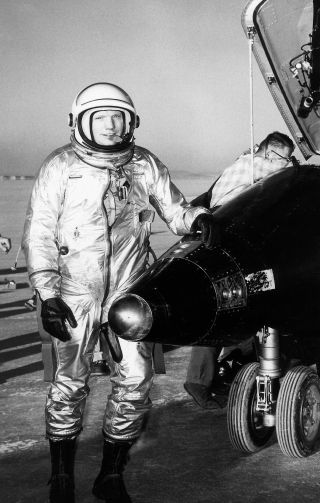 NASA test pilot Neil Armstrong is seen here next to the X-15 ship #1 after a research flight.
(Image: © NASA)

In this 1960 photo from the U.S. space agency, NASA test pilot Neil Armstrong is seen here next to the X-15 ship #1 after a research flight. Armstrong was a naval aviator from 1949 to 1952. When he left the military, he became a test pilot and later, of course, was the first man on the moon. [Giant Leaps: Top Milestones in Human Spaceflight]

The X-15 was a rocket-powered aircraft 50 feet long with a wingspan of 22 feet. It was a missile- shaped vehicle with an unusual wedge-shaped vertical tail, thin stubby wings, and unique side fairings that extended along the side of the fuselage. A total 12 test pilots flew the X-15, the nation's first rocket plane. All total, 199 flights were made between 1959 and 1968. Eight of the pilots reached altitudes at or above 264,000 feet — 50 miles — a height recognized then by the U.S. Air Force as being the edge of space. Those pilots were awarded astronaut wings.

In this new series, each weekday, SPACE.com looks back at a the history of spaceflight through photos.