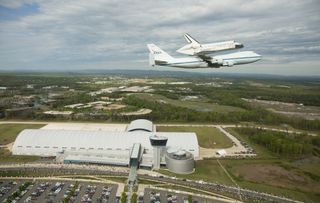 Space shuttle Discovery, mounted atop a NASA 747 Shuttle Carrier Aircraft (SCA) flies over the Steven F. Udvar-Hazy Center, Tuesday, April 17, 2012, in Washington. NASA will transfer Discovery to the National Air and Space Museum to begin its new mission to commemorate past achievements in space and to educate and inspire future generations of explorers.
(Image: © NASA/Robert Markowitz)

COLORADO SPRINGS, Colo. — On Tuesday (April 17), NASA delivered the space shuttle Discovery to its new home in Washington, D.C., marking the true beginning of the end to the agency's venerable shuttle program. But more than 1,600 miles away (2,575 kilometers), NASA's chief heralded the beginning of a new age of space exploration.

"Just because the shuttle is retired doesn't mean NASA is shuttered — far from it," NASA administrator Charles Bolden told the audience here at the 28th National Space Symposium. "I believe the best is yet to come. Our bigger dreams are just starting to come to fruition."

After 135 flights, the agency retired its space shuttle program to focus on the development of a new capsule and rocket for deep space exploration. The mothballed orbiters will now be placed on display at museums across the country.

Discovery, the most-flown shuttle in NASA's fleet, was the first to be delivered its museum destination. The workhorse orbiter will now be placed on public display at the Smithsonian National Air and Space Museum's Steven F. Udvar-Hazy Center in Chantilly, Va.

"[T]his morning, we accomplished an incredible milestone in a series of milestones as we phase out the most incredible program, probably, in the history of human spaceflight," Bolden said.

The shuttle prototype vehicle, Enterprise, will be the next to travel to its new home. Enterprise was previously housed at the Udvar-Hazy Center, but it will now be moved to the Intrepid Sea, Air and Space Museum in New York on April 23.

The shuttle Endeavour will travel to the California Science Center in Los Angeles later this year. Atlantis, the third remaining space-flown orbiter, will be placed on display at the Kennedy Space Center Visitors Complex.

The handoff of Discovery, and the beginning of its new life on public display, represents a transfer of the space shuttle program from NASA to the American public and the rest of the world, Bolden said.

But the end of the shuttle program does not mean that NASA is slowing down, he added. Bolden listed the various robotic science missions that are still ongoing, including the Cassini spacecraft at Saturn, the planet-hunting Kepler space telescope, and the Mars Reconnaissance Orbiter at the Red Planet.

He also highlighted upcoming milestones, such as the Curiosity rover's scheduled landing on Mars in August, the Juno spacecraft's arrival at Jupiter in 2016, and the launch of the James Webb Space Telescope — a sophisticated observatory that is being billed as the successor to the Hubble Space Telescope — in 2018.

The agency is also developing a new heavy-lift launch vehicle, called the Space Launch System, and a capsule, called the Multi-Purpose Crew Vehicle, that will be used for deep space exploration missions.

Bolden also discussed continuing efforts to help private companies develop a new fleet of spacecraft to ferry supplies — and one day, astronauts— to and from the International Space Station. On April 30, California-based SpaceX is slated to launch its unmanned Dragon capsule on a test flight to rendezvous and dock with the orbiting outpost.

If successful, SpaceX will be the first private company to accomplish the feat.

"This will be a historic milestone," Bolden said.

But the NASA chief also discussed the challenges facing the agency, including how to operate in an increasingly tight fiscal environment. In his fiscal year 2013 budget request, President Barack Obama set out $17.7 billion for NASA, with significant cuts to the agency's planetary science department. [NASA's 2013 Budget: What Will It Buy?]

"Some tough decisions had to be made, but I believe we have the right balance to accomplish great things," Bolden said. "Despite constrained economic times, we have made substantial choices — sustainable choices — to provide stability and continuity to existing priority programs, and set the pace for opening the next great chapter in exploration."

Bolden expressed NASA's commitment to fostering American innovation and American ingenuity, and stressed that the agency's ambitious initiatives represent a new era of exploration for the country.

"It's about keeping the U.S. the world leader in space exploration, and showcasing our knack for solving problems and improving life here on Earth," he said. "It's going to be an amazing ride. As Discovery lands at [the National Air and Space Museum], we see the fruits of the last time we embarked on a mission to do something no one else had done: to build a reusable space vehicle, and to demonstrate an expanding flexibility and capability to live and work in space, as we have been doing for almost 12 years now. As NASA transfers the shuttle orbiters to museums across the country, we also embark on an exciting new space exploration journey. The future is literally happening right now, and NASA intends to lead the march to it."