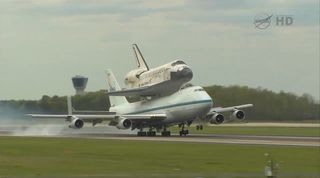 WASHINGTON — The space shuttle Discovery, NASA's fleet leader and the world's most-flown spacecraft, arrived in Washington, D.C. Tuesday (April 17), where it will go on permanent display at the Smithsonian later this week.

The retired space plane was delivered to the nation's capital mounted to the space agency's Shuttle Carrier Aircraft, a modified Boeing 747 jumbo jet, on a final ferry flight that included a historic flyover of the National Mall and some of its nearby monuments and federal buildings.

The four-hour flight left the Kennedy Space Center in Florida at 7:00 a.m. (1100 GMT), just after dawn. Guests at Kennedy's visitor complex and spectators along the space coast were treated to a final flyby of Discovery before the shuttle began its trip up the Eastern Seaboard.

The departure marked a final separation for Discovery and Kennedy Space Center, which had served as the shuttle's home base and launch site since it first arrived at the Florida spaceport atop the same carrier aircraft on Nov. 9, 1983. [Photos: Discovery's Final Piggyback Flight in Pictures]

In the three decades since, Discovery flew 39 missions — more than any other spacecraft in history — and logged more than a year in space. It became the first of NASA's three shuttles to be retired when it landed a final time from space on March 9, 2011.

Next stop: the Smithsonian

Now on the ground at Dulles, Discovery — still atop the Shuttle Carrier Aircraft — will be moved to a remote apron at the airport where NASA has pre-staged large cranes to offload the orbiter starting on Wednesday (April 18).

On Thursday morning, Discovery will be rolled over to the Smithsonian National Air and Space Museum's Steven F. Udvar-Hazy Center, located adjacent to the airport, for a transfer ceremony. Many of the shuttle's former mission commanders, as well as Smithsonian and NASA officials, will take part in the public event, which will kick off a four-day "Welcome Discovery" festival at the northern Virginia museum.

By the end of the day Thursday, should all go as planned, Discovery will take its place in the Udvar-Hazy's James S. McDonnell Space Hangar as its centerpiece.

Discovery is replacing the shuttle prototype Enterprise, which had been on display at the museum since 2003. Enterprise will be flown to New York on Monday (April 23) to be displayed at the Intrepid Sea, Air and Space Museum this summer.

Leading the fleet into retirement

Discovery is the first of NASA's now retired shuttle fleet to embark on a new mission as a museum exhibit.

In April 2011, NASA also awarded shuttle Endeavour to the California Science Center in Los Angeles and retained Atlantis for its own visitor complex at the Kennedy Space Center in Florida. Endeavour will depart for the west coast in September; Atlantis is scheduled to be rolled down the road two months later in November.

Discovery was first promised to the Smithsonian in 2008. The fleet leader, Discovery spent more than 365 days in space over the course of its 39 missions, more than any other vehicle to launch and return from Earth orbit.

The third of NASA's orbiters to enter service, Discovery deployed the Hubble Space Telescope and the Ulysses solar probe and was the first spacecraft to recover satellites from orbit. It also returned the shuttle program to flight after the losses of Challenger and Columbia in 1986 and 2003, respectively.

Discovery was the first shuttle to visit the International Space Station and delivered its largest laboratory, among other components.