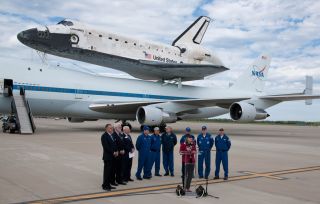 NASA Deputy Administrator Lori Garver, at podium, speaks to those in attendance at Apron W after the 747 Shuttle Carrier Aircraft (SCA) with space shuttle Discovery mounted on top rolled to a halt at Washington Dulles International Airport, Tuesday, April 17, 2012 in Sterling, Va. NASA will transfer Discovery to the National Air and Space Museum to begin its new mission to commemorate past achievements in space.
(Image: © NASA/Smithsonian Institution/Dane Penland)

The space shuttle Discovery's flying days may be over, but a set of stunning new panoramic photos ensures that the space plane will remain fresh in people's minds for years to come.

Discovery made its last flight Tuesday (April 17), riding on the back of a modified 747 jet from NASA's Kennedy Space Center in Florida to Washington, D.C., where it will soon take up residence at the Smithsonian Institution's National Air and Space Museum.

The museum plans to seal the shuttle up, so visitors won't be able to take Discovery's controls or peer into the astronauts' oven. But now anyone with a computer can get a great look inside NASA's shuttle fleet leader, which flew 39 space missions and spent 365 days in Earth orbit during its long career.

Photographers working with National Geographic took a series of high-resolution pictures of Discovery's interior, then stitched them together into a huge, crisp and zoomable panorama using software called GigaPan. GigaPan is based on technology developed for NASA's Mars rovers Spirit and Opportunity.

One such panorama, created by photographer Jon Brack, shows Discovery's mid-deck, where astronauts slept, prepared their meals and carried out some experiments, among other activities. [Photos: Shuttle Discovery's Final Voyage (to Museum)]

Viewers can zoom in to get close-up looks at various parts of the mid-deck, including the airlock hatch, the galley and the "Sally Ride Curtain" — a privacy drape separating the toilet from the rest of the mid-deck. It was set up at the request of NASA astronaut Sally Ride, who became the first American woman in space on the shuttle Challenger's STS-7 mission in 1983.

The photographers also created gigapan images of Discovery's flight deck, payload bay, underbelly and various other shuttle sectors and components; check them out in this National Geographic story or at the magazine's new "Spaceflight HD" hub.

NASA retired its space shuttle fleet in July 2011 after 30 years of service. The three remaining space-flown orbiters will spend the rest of their days as museum showpieces; the shuttle Endeavour is headed to the California Science Center in Los Angeles, while Atlantis will take up residence at the Kennedy Space Center Visitors Complex in Florida.

Enterprise, a shuttle prototype that never reached space, had been at the Smithsonian but will head to New York City's Intrepid Sea, Air and Space Museum to make room for Discovery.

A total of five NASA space shuttles reached orbit, but two of them were lost along with their entire seven-astronaut crews in the line of duty. The shuttle Challenger exploded shortly after liftoff in 1986, while Columbia broke apart during re-entry to Earth's atmosphere in 2003.