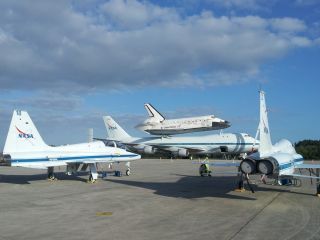 The space shuttle Discovery will take to the skies one more time today (April 17), but not on the power of its own engines.

Weather permitting, the retired shuttle orbiter will fly atop a modified Boeing 747 jet from Florida to Virginia to take its place in the collection of the Smithsonian's National Air and Space Museum. Discovery and its jumbo jet ride are due to depart just after sunrise from NASA's Kennedy Space Center in Cape Canaveral, Fla., and land midmorning at the Dulles International Airport outside Washington, D.C.

To make the journey, Discovery will be hoisted atop a Boeing 747 known as a Shuttle Carrier Aircraft, which will carry the orbiter. Once in Dulles, two huge cranes will lift the orbiter off the jet and set it on its wheels on the ground.

During today's flight, the linked aircraft are scheduled to fly over parts of Washington, D.C., where "Spot the Shuttle" gatherings are being planned on rooftops, balconies and outdoor restaurants. If all goes according to schedule, between 10 a.m. and 11 a.m. EDT (1400 to 1500 GMT), viewers should be able to see Discovery from the National Mall, Reagan National Airport, the National Harbor and other spots.

This shuttle-spotting map of Washington shows recommended areas from which to view the flyover. Twitter users can post pictures and sighting reports under the hashtag #spottheshuttle.

The public is also invited to the Udvar-Hazy center starting at 8 a.m. ET to watch Discovery's approach from the center's parking lot (there will be no public access to view the landing from the airport).

"Visitors are invited to BYOB — Bring Your Own Breakfast — and join fellow shuttle spotters in the lot," Smithsonian officials said in a statement. They recommend bringing binoculars to watch the approach.

The shuttle's arrival in Dulles will also be simulcast live from the Air and Space Museum's building on the National Mall in Washington, D.C.

Discovery is one of NASA's three space shuttle orbiters, which all flew their final trips to space last year. The orbiter's sister spacecraft, Atlantis and Endeavour, will be put on public display at the Kennedy Space Center Visitors Center and the California Science Center in Los Angeles, respectively.

You can watch coverage of shuttle Discovery's flight and arrival in Virginia live on NASA Television here: http://www.nasa.gov/ntv.

Editor's Note: If you snap photos of Discovery flying piggyback over Washington, D.C., and want to share them with SPACE.com for a story or gallery, send photos and comments to managing editor Tariq Malik at: tmalik@space.com.