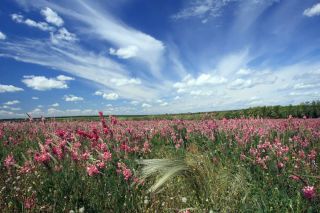 Spring is off to a warm start.
(Image: © © Tatiana Morozova | Dreamstime.com)

Today is the first day of spring in the Northern Hemisphere. Though no guarantee of gorgeous weather that's not too hot and not too cold, the Earth's position relative to the sun says it's officially time for the birds to start chirping.

The first day of spring arrives on varying dates (from March 19-21) in different years for two reasons: Our year is not exactly an even number of days; and Earth's slightly noncircular orbit, plus the gravitational tug of the other planets, constantly changes our planet's orientation to the sun from year to year.

This year, spring starts Tuesday, March 20, at 1:14 a.m EDT (05:14 Universal Time). That's when the so-called vernal equinox occurs. Equinoxes (which mark the onset of spring and autumn) and solstices (which mark when summer and winter begin) are points in time and space that mark a transition in our planet's annual trip around the sun.

At each equinox, the sun crosses Earth's equator, making night and day of approximately equal length on most of the planet. At the equator, the sun is directly overhead at noon on either equinox. However, day and night are not exactly equal on the date of the equinoxes. For instance, at higher latitudes in the Northern Hemisphere, the "equal day and night" occurs a few days before the spring equinox, while in the Southern Hemisphere that date comes after the March equinox, according to the National Weather Service. [Earth's Equinoxes & Solstices (Infographic)]

Earth's multiple motions — spinning on its axis and orbiting the sun — are behind everything from day and night to the changing seasons. The sun comes up each day because Earth rotates once on its axis every 24 hours or so. Seasons are a result of Earth being tilted 23.5 degrees on its spin axis coupled with the planet's 365-day orbit around the sun.

Imagine Earth as an apple sitting on one side of a table, with the stem being the North Pole. Tilt the apple 23.5 degrees so the stem points toward a candle (the sun) at the center of the table. That's summer for the top half of the apple.

Keep the stem pointing in the same direction but move the apple to the other side of the table: Now the stem points away from the candle, and it's winter on the top half of the fruit. The very top of the apple, representing the north polar region, is in total darkness 24 hours a day, during that season.

As long ago as the fourth century B.C., ancient peoples in the Americas understood enough of this that they could create giant calendars to interact with the cycle of sunlight. They built observatories of stone to mark the solstices and other times important for planting or harvesting crops. Shrines and even tombs were also designed with the sun in mind.

As we orbit the sun, the part of the night sky that's in our view changes. A given star sets about 4 minutes earlier each night, amounting to a change of two hours over the course of a month. In winter, this means that we're looking at stars that during the summer were in our daytime sky, overwhelmed of course by the glare of the sun. Since we complete a circle around the sun every year, the stars of summer, such as those in the Big Dipper, are always the stars of summer. [In Photos: 10 Amazing Moon Facts]

During summer on the top half of Earth, our planet is actually farther from the sun than during winter, a fact owing to our non-circular orbit around the sun. The difference is about 3 million miles (5 million kilometers), and it makes a difference in radiant heat received by the entire Earth of nearly 7 percent. But the difference is more than made up for by the longer days in the Northern Hemisphere summer with the sun higher in the sky.

Seasons on other planets

Mercury: This orb is an oddball when it comes to seasons. Its highly elliptical orbit and the fact that the planet rotates three times about its axis during two of its years mean at some longitudes the sun would appear to rise and then gradually increase in apparent size as it slowly moves toward the zenith, according to NASA. Then the sun would take a pause, briefly reverse its path and then resume its trek toward the horizon (and as such appearing gradually smaller). That makes it difficult to identify when one season ends and the next begins. [All about Mercury]

Venus: The planet has relatively constant weather, albeit burning hot (enough to melt lead) due to its runaway greenhouse effect. Tilted just 3 degrees on its axis and with a small orbit around the sun, Venus seasons last just 55 to 58 days with just slight temperature variations.

Mars: The red planet's distance from the sun varies between 1.64 and 1.36 astronomical units, where 1 AU is the distance between the sun and Earth. That large variation, along with its tilt as Mars spins on its axis, means some extreme seasonal shifts. When closest to the sun, Mars' north pole experiences winter, plunging to bone-chilling temperatures so icy that carbon dioxide (the primary chemical in the Martian atmosphere) freezes and falls to the ground.

Jupiter: This planet also has a 3-degree axial tilt and shows basically no difference in temperature between seasons. Due to its long distance from the sun, Jupiter has lengthy seasons lasting about three years.

Saturn: Residing in the outer reaches of the solar system, this gas giant has seasons that last seven years.

Uranus: Though orbiting the sun in a relatively circular orbit, Uranus tilts a whopping 82 degrees on its axis, leading to extreme seasons that last about 20 years. So for about a quarter of a Uranian year, which equals 84 Earth years, the sun shines directly over one of the poles. That leaves the other half of the planet in complete darkness, according to NASA.

This article was provided by LiveScience.com, a sister site of SPACE.com. Follow LiveScience for the latest in science news and discoveries on Twitter @livescience and on Facebook.