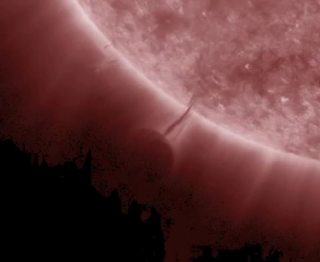 Telescope images captured of the sun on Monday (March 12) show what appears to be a planet-size shadowy object tethered to the sun by a dark filament. In the image sequence, a burst of brightly lit material can be seen erupting from the sun's surface surrounding the dark object, after which the orb detaches from the sun and shoots out into space.

The footage, a composite of images captured by the Solar Dynamics Observatory  and processed by scientists at NASA's Goddard Space Flight Center, has quickly garnered attention on YouTube, where viewers are suggesting it shows a UFO spacecraft refueling by sucking up solar plasma, or at the very least, the birth of a new planet.

However, according to NASA scientists, the feature is actually a little-understood, but frequently observed, type of solar activity called a "prominence," and the way it is situated beneath another solar feature gives it its otherworldy appearance. [See video]

The thread extending from the lower left edge of the sun in the video is known as a "prominence," a feature containing cooler, denser plasma than the surrounding 3.5-million-degree Fahrenheit corona, said Joseph Gurman, project scientist in the Solar Physics Laboratory at NASA Goddard. It isn't yet known exactly how prominences develop, but these dense plasma loops can extend from the sun's surface thousands of miles into space.

"When prominences are that extended in height above the limb [edge of the sun], it's usually a sign that they're about to erupt, as this one did," Gurman told Life's Little Mysteries.

C. Alex Young, a solar astrophysicist at NASA's Goddard Space Flight Center who runs a website called The Sun Today, explained that the prominence is situated below a tunnel-shape feature called a filament channel. "When you look at it from the edge of the sun, what you actually see is a spherical object. You're actually looking down the tunnel. And this tunnel sits up top of the filament," Young explained at The Sun Today. He added that the development of these structures is quite common.

But why is the prominence dark? Gurman explained that all the light in the SDO images is the same color — a specific wavelength that is emitted by iron atoms that have been ionized 13 times, known as Fe XIV. The dark filament seen in the images (the refueling UFO's "tether," according to YouTube users) is a part of the prominence that happens to absorb light of this color, making it appear dark. "The absorption is typically seen in lines such as Fe XIV only in the thinnest, densest parts of the prominence, which is here seen edge-on as it rotates over the solar limb," he said. [6 Everyday Things That Work Strangely in Space]

In the image sequence, there is a burst of activity around the prominence, and then it and the filament channel shoot out into space immediately afterwards. According to Gurman, the first event was probably an outburst of the sun's magnetic field called a coronal mass ejection. "It's generally accepted, though still not conclusively proven, that prominence eruptions occur when the overlying magnetic field that contains the prominence material is disrupted," he said.

Less exciting than a refueling UFO or a brand new planet, maybe — but there's nothing quite like the truth.