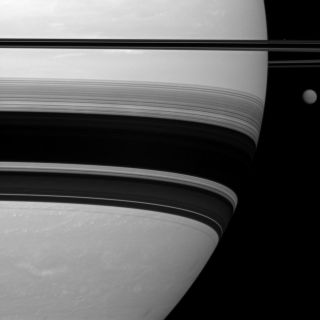 In this photo, snapped by NASA's Cassini spacecraft on Jan. 5, 2012, Saturn's rings cast shadows on the huge planet. Saturn's largest moon, Titan, is visible just below the rings, in the upper right of the picture.
(Image: © NASA/JPL–Caltech/Space Science Institute)

A spectacular new photo shows Saturn's rings casting shadows across the planet, while the huge moon Titan looms in the distance.

The iconic rings of Saturn cut across the top of the image, which was captured in infrared light by NASA's Cassini spacecraft on Jan. 5 and released to the public today (March 5). The rings' shadows play out below, creating dark bands and stripes across much of the gas giant's surface.

In the new Saturn photo, the planet's largest moon, Titan, hangs just beneath the rings, in the upper right portion of the image. Just above the rings sits the tiny moon Prometheus, barely visible as a tiny white speck.

At 3,200 miles (5,150 kilometers) in diameter, Titan is nearly 50 percent wider than Earth's moon. The only moon in our solar system larger than Titan is Ganymede, which orbits Jupiter.

Titan has a thick, nitrogen-rich atmosphere that shrouds the frigid body in a soupy brown haze. Complex organic molecules — the carbon-containing building blocks of life as we know it — swirl about in this atmosphere.

The huge moon also has a hydrocarbon-based weather system, with methane rain falling from the sky and pooling in liquid-methane lakes. Astrobiologists speculate that Titan may be one of the best places in the solar system to search for extraterrestrial life.

Prometheus is an entirely different body altogether — an irregularly shaped, elongated moon just 53 miles (86 kilometers) across. Scientists think Prometheus is a porous, icy object, but they don't know much about it.