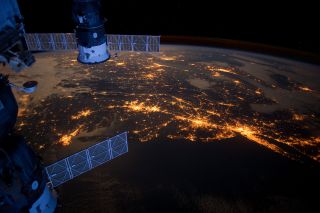 A member of the International Space Station's Expedition 30 crew snapped this nighttime image of the Atlantic coast of the United States on Feb. 6, 2012. Parts of two Russian spacecraft parked at the orbiting outpost can also be seen in the left foreground.
(Image: © NASA)

The twinkling lights of the U.S. East Coast shine like beacons in a spectacular new nighttime photo snapped by an astronaut living on the International Space Station.

A member of the station's six-man Expedition 30 crew captured the magnificent view of the U.S. Atlantic coast on Feb. 6, as the orbiting outpost flew roughly 240 miles (386 kilometers) above the Earth's surface.

The new nighttime photo of Earth, which NASA featured today (Feb. 27) on its website, spans across a number of East Coast states, from Pennsylvania to Rhode Island and parts of Massachusetts. Several large metropolitan areas are easily recognizable, including New York and Long Island on the lower right and Philadelphia and Pittsburgh near the center. Boston appears just out of the frame on the right of the picture.

Parts of two Russian spacecraft, which are parked at the space station, are also visible in the left foreground.

The International Space Station is currently home to a diverse crew of spaceflyers made up of two American astronauts, a Dutch astronaut and three Russian cosmonauts.

The space station astronauts and cosmonauts are privy to spectacular sights and often share videos or photos of Earth from space. In addition to other experiments, the astronauts take time in orbit to perform Earth observation for science and public outreach.

Space station commander Dan Burbank, of NASA, and cosmonauts Anton Shkaplerov and Anatoly Ivanishin are scheduled to return to Earth on April 30 after their months-long mission. Three new residents are slated to launch to the station in May to round out the future Expedition 31 crew.