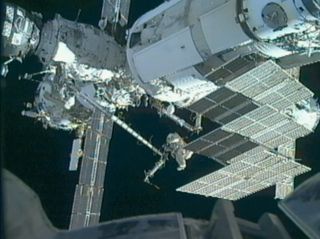 Russian cosmonaut Anton Shkaplerov (right) rides the Strela crane outside the International Space Station during a 6-hour, 15-minute spacewalk with crewmate Oleg Kononenko on Feb. 16, 2012. The cosmonauts moved the Strela crane to a different spot on the station.
(Image: © NASA TV)

Two spacewalking cosmonauts moved a bulky zero-gravity crane to a new home on the International Space Station Thursday (Feb. 16), but ran out of time before they could beef up the orbiting lab's armor against space junk.

Russian spaceflyers Oleg Kononenko and Anton Shkaplerov spent more than six hours working outside the space station during the spacewalk. Their main goal was to move a space construction crane, called Strela, from the Pirs docking port on the bottom of the space station to a rooftop module called Poisk.

The spacewalkers had planned to install new metal shields on the station's Russian segment to protect it against damage from micrometeorites and space junk. But the crane relocation work ran long and they had to skip the shield installation task.

Flight controllers at Russia's Mission Control center near Moscow told the cosmonauts they did a wonderful job, despite the skipped work. The spacewalk began at 9:31 a.m. EST (1431 GMT) and lasted six hours and 15 minutes.

For Russia's Federal Space Agency, the crane relocation was the critical item on today's spacewalk to-do list. The move ensures the crane will remain aboard the space station when the Pirs docking port is discarded to make way for Russia's new Multipurpose Laboratory Module, which is due to arrive at the outpost by 2013, NASA officials said.

It was tough work in space, with the cosmonauts falling more than an hour behind schedule in order to move the unwieldy crane without damaging other parts of the space station. Mission controllers reminded the spacewalkers to use their spacesuit cooling systems to avoid overheating from their exertion. [Photos: Building the Space Station]

"We're all hot and bothered," one of the spacewalkers said at one point.

Unlike the space station's Canadian-built Canadarm2 robotic arm, the Strela cranes are unpowered. They are operated by a hand crank that cosmonauts turn in order to extend the crane to a desired length.

In addition to the crane work, the cosmonauts also took took swab samples of areas beneath the insulation covering the station's Pirs module. Russian scientists want to test the samples to see if any organisms have survived beneath the many layers, NASA officials said. The spacewalkers also installed a new materials experiment called Endurance before wrapping up their work.

Kononenko and Shkaplerov are two members of the six-man Expedition 30 crew currently living aboard the International Space Station. Two Americans, another Russian and a Dutch astronaut round out the crew.

Today's spacewalk is the 162nd spacewalk dedicated to the construction and maintenance of the International Space Station, which was built by five different space agencies representing 15 countries. Construction of the $100 billion space station began in 1998.