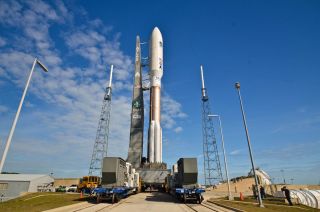 SAN FRANCISCO —The U.S. Navy and Lockheed Martin are preparing to launch the first satellite in a long-overdue military communications constellation on Thursday (Feb. 16), even as contractors scramble  to finish developing the waveform that will enable U.S. forces to take advantage of the spacecraft's most advanced features.

Each MUOS satellite will carry two payloads: a payload similar to the one currently flying on each of the Navy’s aging UHF Follow-On satellites to provide links to currently deployed user terminals and a second, digital payload designed to offer 10 times the capacity of the legacy satellites.

"The MUOS constellation will offer significantly improved coverage, capacity and, for the first time, communications on the move for the warfighter," said Mark Pasquale, MUOS program manager for Lockheed Martin Space Systems of Sunnyvale, Calif., prime contractor for the satellites and the MUOS terrestrial network. MUOS satellites will function "basically like a cellphone tower in the sky," Pasquale said. "You can think of the handheld user terminals as robust, rugged smartphones."

That cellphone-like capability will not be available immediately after launch, however, because General Dynamics C4 Systems, prime contractor for the Joint Tactical Radio System (JTRS) Handheld, Manpack, Small Form Fit program still is developing the waveform that will enable military users to communicate with the MUOS satellites’ digital payload.

That work is scheduled to be completed next summer. In the meantime, the first MUOS satellite will use its UHF Follow-On payload to augment the Navy’s narrowband constellation and provide communications through existing user terminals. [Top 10 Space Weapons Concepts]

The Navy also plans to test the current version of the waveform after the first MUOS spacecraft is launched on a United Launch Alliance Atlas 5 rocket, into geostationary orbit over the Pacific Ocean, said Steven A. Davis, a spokesman for the Space and Naval Warfare Systems Command in San Diego. The spacecraft is scheduled to undergo approximately six months of on-orbit checkout and testing before it becomes operational, Davis said. [MUOS Atlas 5 Rocket Rollout Photos from Spaceflight Now]

MUOS user terminals are expected to feature the final version of the waveform following the launch of the second MUOS satellite, he added.

That satellite, which is undergoing thermal vacuum testing at Lockheed Martin’s Sunnyvale facility, is scheduled for launch in early 2013. Lockheed Martin has completed construction of the third MUOS spacecraft and is building the fourth and fifth satellites. Each MUOS satellite is scheduled to complete testing and integration approximately one year behind the previous one, Pasquale said.

With the satellites in production, government and industry officials are anxious to gain access to the digital MUOS waveform because demand for UHF communications far outpaces available supply. The Navy launched 11 UHF Follow-On satellites between 1992 and 2003. The first satellite suffered a launch failure and two additional satellites stopped working in 2005 and 2006. The eight remaining UHF Follow-On satellites are degrading due to age, Navy officials told lawmakers May 11 during a U.S. Senate Armed Services strategic forces subcommittee hearing.

"The delay in delivery of the MUOS system, coupled with the age and fragility of the current UHF satellite constellation, has our full attention and focus," Rear Adm. David Titley, director of the Navy’s space and maritime awareness domain, and John Zangardi, Navy deputy assistant secretary for command, control, communications, computers, intelligence, information operations and space, said in a joint statement.

To prevent gaps in UHF capacity, the Navy has leased services on Intelsat General's Leasat, the United Kingdom’s SkyNet satellites and the Italian defense ministry’s Sicral satellite. In addition, the service has repositioned and reprogrammed existing spacecraft to expand capacity.

"Currently, the military and commercially leased legacy UHF satellite communications assets exceed warfighter requirements by approximately 111 channels worldwide," Davis said in an email. "Although the unplanned loss of a [UHF Follow-On satellite] before MUOS-1 [is operational] would result in the UFO constellation not meeting its availability requirement, total UHF SATCOM capacity for the warfighter would still be met."

Former Pentagon officials note, however, that the Navy’s published requirement for UHF satellite communications capacity falls far short of actual demand. Demand continues to climb, due largely to the proliferation of unmanned aircraft, while supply remains low, due largely to delays in the MUOS program. The Navy originally planned to launch the first MUOS satellite in late 2009.

In an attempt to meet high demand, the Senate Armed Services Committee included language in a report accompanying the 2012 Defense Authorization Act calling on the Navy to explore hosted payloads or other options to expand UHF capacity and to deliver to the committee a report on that review "no later than March."

The Navy already plans to share UHF capacity in the Indian Ocean region on a hosted payload the Australian Defense Force plans to send into orbit in March on Intelsat General’s IS-22 commercial communications satellite. In exchange, the Australian Defense Force will share MUOS capacity in the Pacific Ocean region under an agreement signed in April 2010.

Intelsat plans to fly a copy of that UHF payload on IS-27, a satellite scheduled to launch in December into a slot over the Atlantic Ocean, said Richard DalBello, vice president for legal and government affairs for Intelsat General of Bethesda, Md. While that satellite will be designed primarily to offer television service to Latin America, it also will feature a payload identical to the one on IS-22, so it can support the tens of thousands of UHF terminals deployed around the world, he added.

"The Navy has not yet agreed to buy any capacity on Intelsat 27,” DalBello said in an email. “We hope the government will be supportive so we can make this capability available to the war fighter and our closest allies."