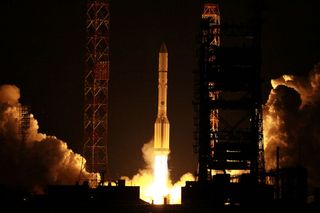 Weighing 13,624 pounds (6,180 kilograms) and carrying 52 C-band and 72 Ku-band transponders, SES-4 will be the biggest satellite in Luxembourg-based SES’s 50-satellite fleet. The satellite launched at 1:36 a.m. local time, lighting up the pre-dawn sky.

The SES-4 satellite will operate at 22 degrees west longitude, over the Atlantic Ocean, to replace existing SES capacity there and to add new coverage of North and South America, Europe and Africa.

SES-4 is also equipped with four regional Ku-band spot beams to focus capacity on Europe, the Middle East, West Africa and the Americas, SES said. The satellite, built by Space Systems/Loral of Palo Alto, Calif., is designed to provide 20 kilowatts of power to its payload at the end of a scheduled 15-year service life.

Operating from Russia’s Baikonur Cosmodrome in Kazakhstan, the Proton rocket and its Breeze M upper stage placed SES-4 into its intended transfer orbit nine hours and 12 minutes after liftoff.

SES, which is in the middle of its biggest satellite replacement and expansion program, said its next launch will occur by June, when the SES-5 satellite is scheduled to be placed into orbit, also by an ILS Proton vehicle.