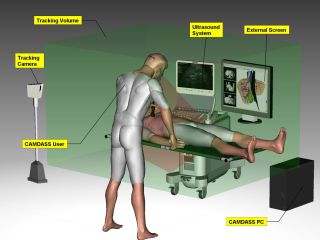 CAMDASS uses a stereo head-mounted display and an ultrasound tool tracked via an infrared camera. The patient is tracked using markers placed at the site of interest.
(Image: © ESA/Space Applications Service NV)

Astronauts stuck on a space station or mission to Mars must treat illnesses or do surgery with their own hands, but not necessarily without some virtual help. A 3D visor display being tested on Earth could guide astronauts with virtual reality graphics overlaid on top of the real world.

Such a do-it-yourself space medicine device may prove a lifesaver for deep-space missions — especially if communication delays or blackouts prevent astronauts from contacting medical experts on Earth. The "augmented reality" technology could also help emergency responders far from hospitals, battlefield medics, or scientists stuck in remote places such as Antarctica.

"Once it reaches maturity, the system might also be used as part of a telemedicine system to provide remote medical assistance via satellite," said Arnaud Runge, a biomedical engineer overseeing the project for the European Space Agency. "It could be deployed as a self-sufficient tool for emergency responders as well."

The 3D display allows the wearer to see virtual "cue cards" that guides his or her hands to points on a patient's body that matches the points on a virtual version of the patient. The wearer follows the virtual guidance to correctly position an ultrasound probe used in medical exams.

Wearers can also control the CAMDASS (Computer Assisted Medical Diagnosis and Surgery System) headset with spoken commands, and view ultrasound images of what they should be seeing during the medical exams.

The European Space Agency has already begun testing the headset with the ultrasound probe at Saint-Pierre University Hospital in Brussels.  But newer versions could someday guide astronauts through more complicated medical procedures such as surgery.

"Although medical expertise will be available among the crew to some extent, astronauts cannot be trained and expected to maintain skills on all the medical procedures that might be needed," Runge said.