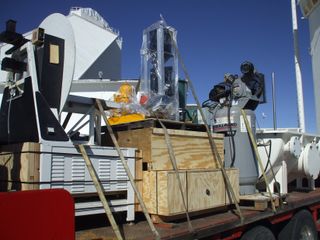 Components are placed on a flatbed trailer for the trip off Kitt Peak. All critical optics and electronics were shrink-wrapped and went down in a covered semi. Everything will be transferred to an enclosed trailer for the cross-country trip. In the background at top left is the McMath Pierce Solar Telescope, which fed sunlight into the FTS.
(Image: © Kim Streander, NSO/AURA/NSF)

A powerful solar instrument that scientists once used to create a colorful reconstruction of the sun's light is now taking a cross country trek to a new observatory for its new mission: dissecting the chemistry of comets and stars.

The so-called Fourier Transform Spectrometer (FTS), which previously formed part of the National Solar Observatory at Kitt Peak, Ariz., is being shipped this week to Old Dominion University in Norfolk, Va. The instrument, packed into an enclosed trailer, is scheduled to arrive on Thursday (Feb. 9), and will be managed by Peter Bernath, chair of the university's department of chemistry and biochemistry.

"The FTS is one of the premier instruments for laboratory spectroscopy, high-resolution solar spectroscopy, and other research," Bernath said in a statement. "It is a fantastic instrument."

Bernath has used the FTS instrument in his research before, including a study that discovered traces of steam inside sunspots. At its new home, the instrument is expected to yield new results on various cosmic objects.

"I would like to use the FTS in a laboratory here at [the university] to make measurements related to molecules in the atmospheres of planets, comets, and stars, as well as for undergraduate and graduate teaching" Bernath said.

The FTS was built between 1971 and 1976, and it was used at NSO's McMath-Pierce Solar Telescope at Kitt Peak through 2001. In addition to solar and atmospheric physics, the instrument also operated as a stand-alone laboratory spectrometer. But, due to budgetary pressures, the organization is no longer able to support the operation of the FTS instrument, NSO officials said in a statement.

The instrument is best known for its colorful reconstruction of the sun's spectrum from 1984. The well-studied image, which has been seen by millions of people, is speckled with black marks that represent the fingerprints of atoms in the solar atmosphere, according to NSO officials.

The image demonstrated the FTS instrument's keen ability to measure the intensity of light at narrow slices of the spectrum, ranging from ultraviolet to the far infrared.

The FTS has its roots in early relativity experiments conducted in 1887 by the American physicist Albert Michelson, who was attempting to measure the speed of light.

Michelson folded a beam of light back on itself, which created light and dark patterns as the light waves interfered with one another. Changes along the path alter the pattern in a measurable way, which enables scientists to calculate the intensity of light at extremely small fractions of a wavelength. [Warped Physics: 10 Effects of Faster-Than-Light Discovery]

The FTS was designed by the late physicist James Brault, who joined NSO in the mid-1960s. At the time, the instrument was considered a radical departure from more typical spectrograph designs.

The instrument uses a laser to measure the ever-changing positions of the light waves in a vacuum chamber. This delicate system enables the FTS to take precise measurements that have proved invaluable to understanding the history of solar physics.

After traveling across the country to its new home, the FTS is expected to continue to play an important role in the exploration of the cosmos, NSO officials said.