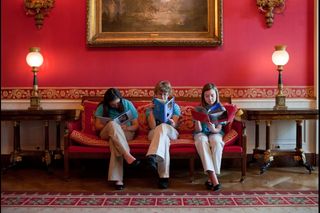 Students, from left, Gaby Dempsey, 12, Kate Murray, 13, and Mackenzie Grewell, 13, read in the Red Room of the White House after setting up their science fair exhibit, Feb. 6, 2012. The three girls, part of the Flying Monkeys First Lego League Team from Ames Middle School in Ames, Iowa, will participate in the second annual White House Science Fair with over 100 students from 45 states.
(Image: © Official White House Photo by Sonya N. Hebert )

Bolden and other senior space agency officials attended the national science fair to support the innovative students chosen to showcase their experiments in the East Wing of the White House. The White House Science Fair is an effort to spur student-interest in the fields of science, technology, engineering and mathematics.

"Programs like this science fair help students develop critical skills and get hands-on experience that will serve them and our nation well in the future," Bolden said in a statement. "These talented students are tomorrow's science leaders, and their skills will be critical to helping us make an American economy built to last."

The White House Science Fair gathered together 100 students from 40 different science competitions across the United States to be honored by Obama. Bill Nye the Science Guy, who current leads the nonprofit Planetary Society, and Tom Kalil of the White House Office of Science and Technology were also onhand, along with Bolden and other NASA officials.

Before speaking to the gathering, Obama met with some student scientists to get a close look at their experiments. One experiment in particular: a marshmallow launcher created by eighth-grader Joey Hudy, of Phoenix, Ariz.

"The Secret Service isn't happy about this," Obama joked as he helped use an air pump to launch a marshmallow across a crowded room.

Two of the science experiments selected for the White House today were related to NASA's own education goals, agency officials said. They included an entry by the "Young Women Rocketing to Nationals" team of Janet and Ana Karen Nieto of Presidio, Texas, who are part of the Presidio High School Rocketry Team that made it to the national finals of the Team America Rocketry Challenge in 2011. [NASA's Best Space Shuttle Science Missions]

Another student group on hand was the robotics team "A Winning Robotics Alliance, with Astronauts Cheering Them On," represented by John Drake of Schaumburg, Ill., Sean Murphy of Atascadero, Calif., and Eric Bakan of San Jose, Calif. The team won the 2011 FIRST Robotics Competition, NASA officials said.

The space agency also used the occasion to showcase its Earth science-oriented Global Learning and Observations to Benefit the Environment (GLOBE) program for primary and secondary school students, as well as the agency's Student Spaceflight Experiments program that allows student teams between the grades 5 and 12 to propose microgravity experiments for the International Space Station.