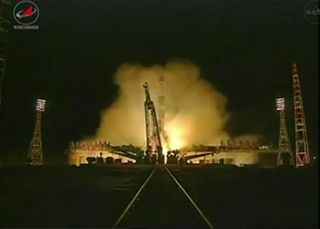 A new robotic Russian space freighter launched into orbit Wednesday (Jan. 25) hauling tons of food and equipment for the crew of the International Space Station.

The unmanned cargo ship Progress 46 soared spaceward atop a Soyuz rocket from the Central Asian spaceport of Baikonur Cosmodrome in Kazakhstan. Liftoff occurred at 6:06 p.m. EST (2306 GMT), though it was early Thursday at the launch site, marking Russia's first space mission of the year.

The Progress 46 spacecraft is due to arrive at the space station on Friday to deliver about 2.9 tons of cargo to the outpost's six-man crew. The space station is currently home to three Russians, two Americans and a Dutch astronaut.

Russia's Progress 24-foot (7.3-meter) spacecraft are disposable vehicles that resemble the three-module design of the country's crewed Soyuz space capsules. But Progress vehicles replace the central crew capsule of the Soyuz with a propellant storage module. At the end of their missions, Progress spacecraft are commanded to destroy themselves by burning up in Earth's atmosphere. [Infographic: How Russia's Progress Spaceships Work]

The launch of Progress 46 comes just two days after the departure of an older cargo ship, Progress 45, from the space station. The Progress 45 spacecraft undocked from the orbiting lab on Monday (Jan. 23) and was disposed of in Earth's atmosphere a day later.

Before Progress 45 burned up on Tuesday it deployed a novel miniature satellite called Chibis-M. The 88-pound (40-kg) microsatellite was released in an orbit that is slight higher than that of the International Space Station. It is expected to spend several years studying how plasma waves interact with Earth's ionosphere, NASA officials said.

The next big departure at the International Space Station will come on March 16, when the outpost's current commander — NASA astronaut Daniel Burbank — and two crewmates are due to return to Earth. They will be replaced by a fresh three-person team slated to launch aboard a Soyuz spacecraft on March 30.

With the retirement of NASA's space shuttle fleet in 2011, Russia's Soyuz spacecraft are the only vehicles currently capable of ferrying astronauts to and from low-Earth orbit. In addition to Russia's Progress vehicles, robotic cargo ships built by the space agencies of Japan and Europe also help keep the space station supplied.

NASA currently plans to rely on private U.S.-built cargo ships to resupply the space station. The first of those commercial space freighters are slated to launch in late March. The U.S. space agency is also relying on new privately built spacecraft to transport astronauts to and from the orbiting lab.