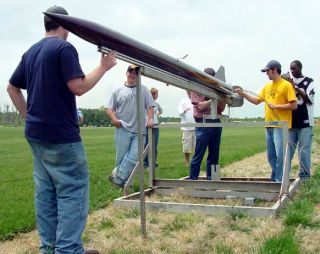 Student team members from Bob Jones High School in Madison, Ala., get ready to launch their rocket at NASA's Student Launch Initiative in 2004.
(Image: © NASA/MSFC/Vince Huegele)

More than 500 students from middle schools, high schools and universities across the country will show off their rocketeering skills during a NASA contest in April.

The students, who represent 57 teams from 29 different states, are taking part in NASA's 2011-2012 Student Launch Projects flight challenge. The teams will build large-scale rockets of their own design, then fly them at the space agency's Marshall Space Flight Center in Huntsville, Ala., on April 21.

The 15 middle-school and high-school teams participating will launch their rockets just for fun, in a non-competititve fashion. But the 42 college and university teams will vie for several different prizes, including a first-place purse of $5,000 provided by ATK Aerospace Systems.

The goal of the flight challenge is to engage students more fully in math and science, challenge their problem-solving skills and give them real-world engineering experience, NASA officials said.

Each student team will build a powerful rocket, complete with a working science or engineering payload that must be activated during the launch. The flight goal is to come as close as possible to an altitude of 1 mile (1.6 kilometers), requiring a precise balance of aerodynamics and propulsive power.

The students must also write detailed reports before and after the launch, and they must maintain a public website chronicling their rocket-building adventures. Further, each team is required to develop educational projects for schools and youth organizations in its community, in an attempt to engage and inspire other youngsters, officials said.

In April, the teams will travel to Marshall, where NASA engineers will put the students' rockets through the same type of stringent reviews and inspections they apply to the nation's space launch vehicles. Then, on April 21, students will fire their rockets toward the 1-mile goal, operate their onboard payloads and wait for their craft to return safely to Earth.

In addition to the $5,000 grand prize, the college and university teams will compete for a variety of awards for engineering skill and ingenuity, team spirit and vehicle design, officials said.