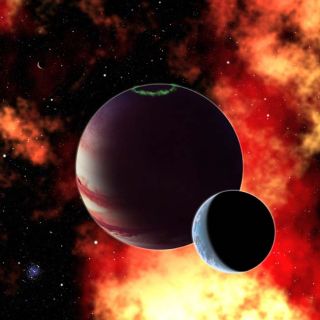 This artist's conception shows a hypothetical gas giant planet with an Earth-like moon similar to the satellite Pandora in the movie "Avatar." If we find such an "exomoon" in the habitable zone of a nearby star, NASA's James Webb Space Telescope, which is slated to launch in 2018, may be able to study its atmosphere and detect key gases like carbon dioxide, oxygen, and water.
(Image: © David A. Aguilar, CfA)

While astronomers continue to search for potentially habitable alien planets, they're expanding the hunt to include moons that could host life as well.

Three new computer simulations may help researchers identify rocky satellites beyond our solar system that could harbor water on their surfaces, if their parent planets circle close enough to their stars.

When scientists working with NASA's Kepler space telescope announced the discovery of 1,235 planetary candidates in February 2011, the list included 37 Neptune-sized planets and 10 Jupiter-sized planets within their star’s habitable zones — the region of space where water can exist as a liquid on a rocky planet. Though gas giants would not boast liquid water on their surface, their moons might.

According to David Kipping, of the Harvard-Smithsonian Center for Astrophysics, a good-size rocky moon at the right distance from its star "ticks all the boxes for our wish list of habitable conditions."

Kipping, one of the members of the Hunt for Exomoons with Kepler team, authored and utilized one of three computer simulations designed to help astronomers pick such an "exomoon" out of the spacecraft's data. [Gallery: A World of Kepler Planets]

Telescopes such as Kepler search for planets as they transit, or cross in front of, their star, causing telltale dips in the star's brightness. Each of the three different simulations takes those transits and searches for variations that would reveal the presence of a moon orbiting a planet.

"When a moon passes in front of a star, it causes the star to appear dimmer for a short amount of time," Kipping said.

As the planet crosses in front of the star, it makes a sizable footprint. The moon, revolving around its planet, also makes a small dip in the light.  As the moon slips behind its planet, the brightness of the star increases very slightly.

Kipping's model, which was published in the journal Monthly Notices of the Royal Astronomical Society (MNRAS) in May 2010, calculated what the signal of a single moon would look like as it slipped between its star and Earth. This signal can even help astronomers find moons whose orbits don't stick to the same plane as their planet.

"If you look at Triton, around Neptune, it has an inclined orbit," Kipping said. Triton orbits Neptune at 157 degrees from the plane of the planet's equator. "Something like that, we would be able to detect." [Photos of Neptune & Its Moons]

Another simulation, created by Luis Tusnski, of the National Institute for Space Research in Brazil, and Adriana Valio, of Mackenzie Presbyterian University (also in Brazil), searches for exomoons orbiting within the same plane as their planet, though it can be easily adapted to look for moons with inclined orbits.

"The physical justification for this assumption (of non-inclined orbits) is that the planet and the moon were formed together," Valio said.

However, it also identifies planets with Saturn-like rings, which create a unique data signal.

The Brazilian team's model, which was published in the December 2010 issue of  the Astrophysical Journal, takes into account the presence of spots on the stellar surface as well. Like the spots seen on our own sun, these dark patches rotate across the surface of the star, reducing the amount of light produced. If a patch lined up with a planet, the dimming could appear to be a moon.

Astronomers using Kipping's simulation would need to search for a wobble in the starlight in order to distinguish between a moon and a starspot; a moon would tug at the stellar body ever so slightly.

While both of these simulations are limited to a single moon, a third study by András Pál, of Konkoly Observatory in Hungary, is capable of analyzing planetary systems with multiple transits.

"András' model is mathematically quite beautiful, as it can handle any number of moons or planets," Kipping said.

At the same time, it is limited to circular orbits, rather than the more varied orbits permitted by Tusnski's.

Pál's research will be published in an upcoming edition of MNRAS.

"Everyone is finding their own approach to solving the problem, and I think they're really very complementary," Kipping said.

In search of a habitable alien moon

According to Tusnski, the French space mission Convection Rotation and Planetary Transits (CoRoT) should be able to detect an exomoon with a radius 1.3 times as large as Earth, while Kepler would be able to spot a moon a third the size of our planet.

"Once the moon is clearly detected, its basic properties, such as its size, can be determined as precisely as the stand-alone planets with similar sizes," Pál said.

But in order to calculate the properties, such a moon must first be found.

"The real question is if they exist," said Kipping.

Jupiter's moon Ganymede, the largest moon in our solar system, is 40 percent as large as Earth, but only 2 percent as massive.

In order to support life, such a moon would likely need to be at least one-third as massive as Earth if it were in our solar system's habitable zone, researchers say.

"Any smaller, and it would be like Mars," unable to hold onto a thick atmosphere, Kipping said.

The gas giants in our solar system have moons with the potential to develop life — but only because they are so far from the sun. Ganymede's icy shell would melt if the moon were significantly closer to Earth, and the water would likely boil off into space. If Saturn's moon Titan were relocated to the sun's habitable zone, it would lose the thick methane atmosphere that makes it a potential candidate for the development of life.

Still, just because our solar system doesn't host any moons of the "right" size in its habitable zone doesn’t mean that alien systems are similarly lacking. The fact that so many gas giants have been discovered close to alien stars makes habitable moons more rather than less likely, researchers say.

Kipping pointed to recent research by Simon Porter of Lowell Observatory in Arizona that indicates approximately half the Jupiter-sized exoplanets migrating inward toward their stars may capture a terrestrial planet as a new moon. Kipping thinks this may be the most likely method for a gas giant to obtain such a large satellite.

"You wouldn't really expect a moon that big to form in situ around a planet," Kipping said.

But if the planet travels all the way through the star’s habitable zone, temperatures might eventually get too high for water to remain on the moon’s surface.

"It's really a question as to, are there many solar systems where the planet stops before it gets too close [to the star]?"