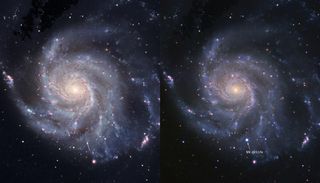 Astronomers have found the first direct evidence that some star explosions are triggered by compact stars called white dwarfs.

Scientists studying the youngest type of Ia supernova ever found worked backward to pinpoint its explosion time with unparalleled accuracy. In doing so, they confirmed that a white dwarf was the source of the blast, and gleaned insights into the nature of the dwarf's companion star.

The discovery occurred in August, when astronomer Peter Nugent spotted a surprising object while poring over data from the Palomar Transit Survey's robotic telescope at Palomar Observatory in Southern California. The object was quickly confirmed to be a type Ia supernova. High-resolution follow-up observations were made within hours by the Keck telescope in Mauna Kea, Hawaii, identifying the elements that burst from the blast.

The speedy response allowed Nugent and his team to follow the evolution of the supernova, called SN 2011fe. [Amazing Photos of Supernova Explosions]

As the light of the explosion reached the brightness of 2.5 billion suns, then slowly faded, the team worked backward to determine exactly when the supernova occurred. Located only 21 million light-years from Earth in the Pinwheel Galaxy, the supernova is the closest one to our planet in 25 years. (A light-year is the distance light travels in a year, about 6 trillion miles, or 10 trillion kilometers.)

"We were able to pinpoint the explosion time very accurately, to an uncertainty of just twenty minutes," Nugent, of Lawrence Berkeley National Laboratory, told SPACE.com.

Knowing how much energy the supernova put out allowed the researchers to, in effect, rewind the stellar explosion to see how it began. Measurements of elements such as nickel enabled them to put a lower limit on the size of the source.

The astronomers also found large clumps of fast-moving carbon and oxygen that disappeared within hours.

"The early observations helped us to constrain the explosion really accurately," Nugent said.

With their results, the team was able to conclude that the cause of the supernova was an extremely compact star known as a white dwarf.

White dwarfs are small, dense stars whose Earth-like radius encompasses a sun-like mass. The core of a white dwarf is too cool to undergo fusion, so its energy slowly dissipates into space.

Astronomers have long suspected that these remnants of dead stars were the source of type Ia supernovae, but SN 2011fe provides the first direct evidence.

Searching for the second

A firsthand examination of the light from the supernova also revealed information about the celestial body that once orbited the white dwarf.

In a type 1a supernova, material flowing from a second star onto the white dwarf overloads the compact relic and triggers the blast.  The companion could be anything from a large red giant star to another white dwarf.

When stars explode, a shockwave rushes outward. Collisions with material around it cause the region to flare brightly. By studying the light from SN 2011fe, Nugent's team was able to rule out specific types of stars as the companion.

The neighbor star could not have been a red giant, Nugent explained, because collisions between the debris and a large, massive star would have been very obvious. The resulting light would have been several magnitudes brighter than what was detected.

Similarly, a white dwarf companion would have been ripped apart, leaving a debris field for the shockwave to collide with, causing an impact that wasn't seen in the data.

"The only thing we were left with was a star not too different from our sun as the companion," Nugent said.

In an accompanying paper, Weidong Li of the University of California at Berkeley also sought information about the companion.

"There were some very deep images from the Hubble Space Telescope prior to the discovery of this supernova," Li told SPACE.com.

Li and his team examined more than a decade's worth of data from NASA's space-based telescope in search of the second star in the pair.

But no star was detected, allowing them to place an upper limit on the size of the companion. A red giant, for instance, would have been visible in the images.

Ultimately, Li and his team concluded that the companion could be a main sequence or subgiant star, or even another white dwarf.

Combined with Nugent's data, this narrows down the identity of the companion star.

"A low mass main sequence star is the object most likely, given the two different ways we went about trying to constrain the progenitor," Nugent said.

Both papers were published in the Dec. 15 issue of the journal Nature.