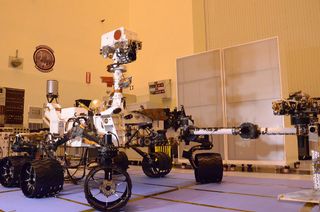 NASA's Curiosity Mars Science Laboratory as seen on Aug. 12, 2011 at the Kennedy Space Center in Florida. The next time the rover will be seen in this configuration is after it lands on the surface of Mars in August 2012.
(Image: © Robert Z. Pearlman/collectSPACE.com)

Scientists are jittery but thrilled about the upcoming launch of NASA's Curiosity rover, the largest Mars rover yet.

The 1,980-pound (900-kilogram) vehicle has been under development for seven years.

"It's a momentous occasion," said Doug McCuistion, director of the Mars program at NASA headquarters in Washington, during a briefing today (Nov. 10). "We're just thrilled that we're at this point. It's not your father's rover."

At roughly the size of a Mini Cooper, Curiosity is about twice the size of previous Mars rovers. It's packed with 10 instruments designed to search for signs that the Red Planet was ever habitable. It will be the first instrument on Mars with the ability to dig up samples of rock, drill into them and analyze their composition. [Photos of NASA's Curiosity Rover]

"This is a Mars scientist's dream machine," said Ashwin Vasavada, Curiosity deputy project scientist at NASA's Jet Propulsion Laboratory in Pasadena, Calif. "It's the most capable scientific explorer we've ever sent out" to another planet.

Another distinctive feature of the rover is its unique landing mechanism, designed to accommodate its hefty size. After an 8 1/2-month flight, the spacecraft carrying Curiosity will begin descending to Mars using parachutes. Then the descent stage of the spacecraft will take over, depending on thruster propulsion for control. When it gets close enough, the descent stage will hover and act as a "sky crane," lowering the rover gently to the ground on tethers.

"We're confident, but it is clearly not risk-free," said Pete Theisinger, Curiosity's project manager at JPL. "Any entry and landing on Mars is a place where you take pause and bite your nails a little bit."

The tense moment is due to occur in August 2012.

Researchers chose their landing site, Gale Crater, from 60 candidate spots. The 96-mile-wide (154 kilometers) crater has a mountain in its center with exposed rock layers dating from different periods in the planet's history.

Scientists think it offers a good chance to learn more about whether the Red Planet was hospitable to life in its past.

"We've known now for decades that there's evidence for rivers and even possible evidence for a lake in the crater we're going to," Vasavada said.