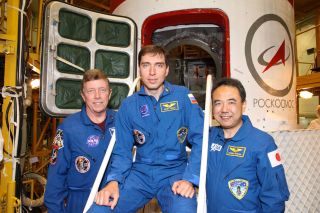 Have a question for the commander of the International Space Station? Let us know!

This Wednesday (Oct. 19), SPACE.com will be speaking to NASA astronaut Mike Fossum, who is currently living and working aboard the space station.

We're looking for your input on questions that you've always wanted to ask an astronaut in space. Just leave your question(s) in this article's comment section, and in the days leading up to the event, we'll pick some of the questions and include them in our interview. We already got some great suggestions on Facebook, but feel free to suggest more!

Then, tune in to NASA TV at 10:20 a.m. EDT (1420 GMT) on Wednesday for our live interview with Fossum, commander of the space station's Expedition 29 mission.

Here's some background on Fossum and the current space station crew:

The International Space Station is currently home to three astronauts — one each from the United States, Japan and Russia. Fossum and his two crewmates, Japanese astronaut Satoshi Furukawa and Russian cosmonaut Sergei Volkov, launched to the orbiting outpost on June 9. The trio is scheduled to return to Earth in mid-November.

Fossum is a veteran of two previous spaceflights: the STS-121 and STS-124 flights both aboard the space shuttle Discovery. Fossum has logged more than 636 hours in space, and has also completed six spacewalks.

On Nov. 14, three new space station astronauts will launch toward the massive laboratory to round out the Expedition 29 crew. NASA astronaut Dan Burbank and Russian cosmonauts Anton Shkaplerov and Anatoly Ivanishin will dock to the station two days later, on Nov. 16.