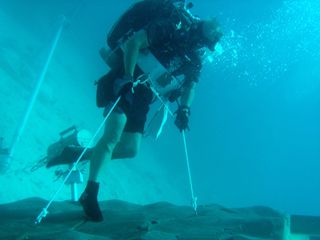 An international astronaut crew may be ready to voyage to the bottom of the sea on a simulated trip to an asteroid, but Mother Nature - it seems - is not. The crew's planned splashdown today (Oct. 17) has been delayed to later this week due to stormy weather at the Florida dive site, NASA officials said.

"It's been delayed until no earlier than Thursday [Oct. 20] because of the tropical storm they're expecting," agency spokesperson Brandi Dean told SPACE.com.

NASA's newest undersea mission was scheduled to get underway today, but the team of six "aquanauts" will have to sit tight and wait out the storm. Mission controllers will continue to monitor conditions and provide updates as necessary, Dean said.

NASA astronaut Shannon Walker, who completed a long duration stint on the International Space Station in 2010, will lead the 13-day mission at the Aquarius Underwater Laboratory, which sits 60 feet (18 meters) below the Atlantic Ocean. The underwater lab is located 3 1/2 miles (5.6 kilometers) off the shore of Key Largo, Fla.

The expedition is NASA's 15th NEEMO (NASA Extreme Environment Mission Operations) voyage, which is used to test technology and innovative engineering solutions for future space missions. NEEMO 15 is the first to act as a mock visit to an asteroid. The agency uses the buoyant underwater environment as a test bed to approximate the near-weightlessness on an asteroid. [Gallery: Visions of NASA Asteroid Mission]

NEEMO 15 will test various concepts and techniques for exploring an asteroid, including how to anchor to it, travel around on its surface, and perform experiments. The results of the undersea mission will help NASA plan for a future manned mission to a space rock.

The NEEMO 15 expedition is made up of six astronauts, as well as noted Mars planetary scientist Steve Squyres and two professional "aquanaut" divers.