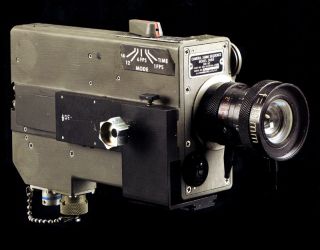 This Data Acquisition Camera, which was flown to the moon's surface by Apollo 14 in 1971, is now the focus of a lawsuit against the astronaut who tried to sell it.
(Image: © Bonhams)

Just who owns a camera flown to the moon — the astronaut who saved it as a souvenir or the government that wanted it left on the lunar surface — will need to be settled in court, a judge ruled this week.

U.S. District Court Judge Daniel Hurley denied Apollo 14 astronaut Edgar Mitchell's motion to dismiss the lawsuit brought against him by the U.S. government last June. At contention, a 16-millimeter data acquisition camera (DAC) that Mitchell returned to Earth in 1971 and then attempted to sell 40 years later.

The government contended it has no record of the camera being given to Mitchell, who elected to remove it from the lunar module (LM) before parting ways with the spacecraft and returning to earth. The LM, which Mitchell and Apollo 14 commander Alan Shepard used to land on and launch off the moon, was destroyed after it was allowed to fall back to the lunar surface.

Mitchell's attorney argued that too many years have gone by for the government to pursue the camera as stolen and besides, it was given to the now 80-year-old moonwalker as a gift in line with NASA's then-policies governing spent equipment. [Lunar Legacy: 45 Apollo Moon Mission Photos ]

Judge Hurley ruled that the statute of limitations as cited in Mitchell's motion and as defined by the state of Florida where the case is being heard did not apply to the federal government's claim.

"'It is well settled that the United States is not bound by state statutes of limitation or subject to the defense of laches in enforcing its rights,'" Hurley quoted in his order, citing an appeals court ruling.

Furthermore, resolving whether the camera was stolen or the subject of a gift or abandonment was "inappropriate" for the purposes of the motion to dismiss.

"Defendant's allegations that NASA intended the camera to be destroyed after the mission or that it routinely awarded used mission equipment to astronauts do not preclude as a matter of law Plaintiff's contrary allegation that Defendant impermissibly converted the camera," Hurley wrote.

Barring some other resolution in the interim, the case of United States of America vs. Edgar Mitchell is scheduled to tried before a jury in October 2012.