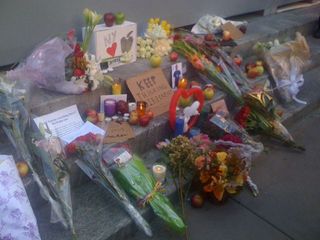 An American astronaut on the International Space Station said the loss of Steve Jobs, who died Wednesday (Oct. 5), reaches all the way to space and will be felt around the world.

"In every generation there are great thinkers and people with vision," Fossum told CBS News. "The vision of what can be, and then have the energy and the skill and the genius to make it happen, and Steve Jobs is definitely one of those rare individuals and the world's going to miss him a lot." [See video of Mike Fossum's tribute]

Jobs died Wednesday at age 56 after a long battle with pancreatic cancer. The news of his death was announced in an Apple statement posted on the company's website.

"Apple has lost a visionary and creative genius, and the world has lost an amazing human being," the Apple statement read. "Those of us who have been fortunate enough to know and work with Steve have lost a dear friend and an inspiring mentor. Steve leaves behind a company that only he could have built and his spirit will forever be the foundation of Apple."

Jobs has been credited as spearheading many of Apple's game-changing technologies, including iPods and iPhones — gadgets that even astronauts in space use today. The first iPhones to fly in space were two iPhone 4s, which NASA launched to the space station in July aboard the agency's final shuttle mission.

Astronauts on the International Space Station get daily news updates about Earth from Mission Control and can access the Internet from their orbiting laboratory. So there are multiple ways to for crewmembers to stay informed on major news events such as the death of Steve Jobs.

Currently the International Space Station is home to three astronauts, one each from the United States, Russia and Japan. Fossum and his two crewmates are due to return to Earth in mid-November.

Apple has invited people to share their thoughts, memories and condolences by writing to rememberingsteve@apple.com.