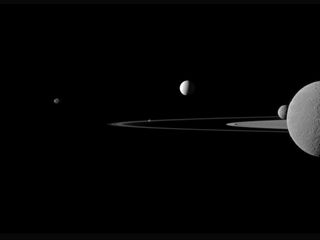 This photo, taken by NASA's Cassini spacecraft on July 29, 2011, shows Saturn's A and F rings and five of its moons. From left, the moons are Janus, Pandora, Enceladus, Mimas and Rhea.
(Image: © NASA/JPL-Caltech/Space Science Institute )

The image, which NASA released Wednesday (Sept. 21), shows Saturn's moons Janus, Pandora, Enceladus, Mimas and Rhea. The planet's rings are beyond Rhea and Mimas, while bright Enceladus appears behind the rings. Cassini took the picture in visible green light on July 29, 2011. [See the amazing photo of Saturn's rings and moons]

The view looks toward the northern, sunlit side of the rings from just above the ringplane, researchers explained in a description.

In the image, Pandora appears near the center of the frame between Saturn's A ring and the thin F ring.

NASA launched Cassini toward Saturn in 1997, and the spacecraft arrived at the ringed planet in 2004. Cassini has been circling the planet to study its rings and moons ever since. Cassini also carried the European Huygens lander, which touched down on Titan in 2005.

Cassini's mission was originally slated to end in 2008, but NASA has extended the Saturn flight twice, most recently until 2017. The Cassini mission is a cooperative effort by NASA, the European Space Agency and the Italian space agency.