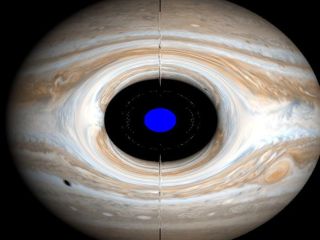 Non-spinning black hole weighing as much as the Sun (one solar mass). Blue circle is the event horizon.

Wouldn't it be cool to stand toe-to-toe with a black hole, to stare it in the eye and finally see what one looks like?

Researchers at Humboldt State University in California say you can, from the safety of your computer screen.

"The idea is to try to answer the question of what does a black hole look like," said David Kornreich.

The simple answer is "black" because light cannot escape the gravitational pull of a black hole.  But light traveling just outside a black hole will be bent -- similar to what happens in a lens.

Kornreich and his student Bryant Gipson have figured out how images of landscapes and planets would be distorted by having a black hole sitting in the foreground.

Such mathematical calculations have been done before for stationary black holes, but this is the first time it has been done for spinning black holes, Kornreich told SPACE.com.  Most black holes in the universe are thought to be rotating -- many at high speeds.

In a stellar black hole, which forms when a giant star dies explosively, the rotation is a logical remnant of the star's spin. Just as a skater speeds up when she pulls her arms in, the dead star's rotation picks up dramatically as remaining material collapses into a small, dense black hole.

The computations for a rotating black hole are complicated by the fact that space around the hole is forced to rotate with it.  This so-called frame dragging will affect everything in the vicinity of the spinning black hole.

"Even light rays will get pulled along with the rotation," Kornreich said.  "Those that run counter to the rotation sometimes don't make it -- they get sent backwards."

Because some light rays are shot back at you, it is possible to see your own reflection if you look carefully at the side of the black hole rotating towards you, the thinking goes.  But this does not mean astronomers will be able to see themselves through a telescope.

"This is something you would only see in a spacecraft as you approached a black hole," Kornreich said.

To observe these distortions one would have to be within about three or four times the black hole's Schwarzschild radius, said Kornreich.  For a non-spinning black hole, this radius defines the event horizon -- the sphere of gravitational no return for intrepid black hole investigators.

A black hole packing the mass of our Sun would have a Schwarzschild radius just under two miles (3 kilometers).  One with the Earth's mass would have a radius of about a third of an inch (9 millimeters).  In images of Jupiter mocked up by the researchers, blue circles are added show the event horizon of a black hole.

The mass of the black hole is somewhat arbitrary -- the distorting hole could be a big one far away, or a smaller one close by.  For clarity, the researchers assume in the captions that the black holes weigh something like the Sun, and we are looking at them from less than 10 miles out.

There is a theoretical limit to the rotation speed -- technically, the angular momentum -- of a black hole.  Spinning faster than this limit, the event horizon disappears, exposing the point of infinite density -- called the singularity -- at the center of the hole.

"A 'naked' singularity is a black hole that is rotating so fast that light can escape from it along certain trajectories.  Hence, an outside observer could 'see' the singularity at the center," Kornreich said.

A body spinning above the theoretical limit would likely fall apart before ever forming a black hole, so naked singularities are unlikely to exist.  "But they are interesting to think about," Kornreich said.

Gipson and Kornreich presented some of their images at an American Astronomical Society meeting in May.  The eventual goal of their work is to make an educational software package.

"The idea is to put it into a computer program -- not really a video game, but like one.  It will let you orbit the black hole and get closer to it," Kornreich said.

Users will be able to experience the funhouse images that a nearby black hole creates -- without feeling the unpleasant gravitational forces.  Kornreich explained that -- rather paradoxically -- a small black hole is more deadly than a big one.

"Tidal forces are worse around a black hole of lesser mass," he said.  "The gravity around a small black hole is changing rapidly and that is what kills you -- it stretches you into a string of spaghetti."

The process is called spaghettification, in case you were wondering.

Figure 1: A non-spinning black hole in the center of a cube with multiple landscapes on each side.  The roof, floor and side walls are visible close to the hole.

Figure 2: A naked singularity, in which the black hole is spinning 4 times faster than the theoretical limit -- a situation that may not be physically possible.