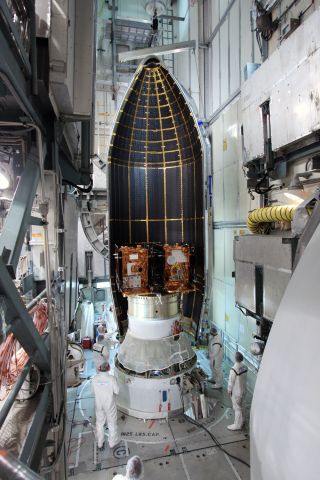 The payload fairing is added to the GRAIL booster.
(Image: © NASA/KSC)

NASA is set to launch a new robotic mission to the moon today (Sept. 8) and students are invited to ride along ... sort of.

The space agency's Grail moon probe mission, made up of twin spacecraft called Grail-A and Grail-B, are carrying special cameras that will photograph specific areas of the lunar surface, as requested by middle school students and educators across the country.

The cameras are a perk for students following the Grail mission, which is aimed at exploring the interior of the moon and building the most precise lunar gravity maps to date. The twin spacecraft are slated to launch today at 8:37 a.m. EDT (1237 GMT) from Florida's Cape Canaveral Air Force Station. [Photos of NASA's Grail Moon Gravity Mission]

"Using the context of lunar exploration, using gravitational experiments, MoonKAM will serve as eyes on the moon for students," Leesa Hubbard, a teacher-in-residence at Sally Ride Science in San Diego, said in a news briefing on Wednesday (Sept. 7).

On the MoonKam website, tens of thousands of middle school students will be able to select areas on the lunar surface and submit image requests to the so-called MoonKAM Mission Operations Center, which will be monitored by students at the University of California San Diego.

The requested images will be beamed back by the Grail probes and posted on the MoonKAM website, where students will be able to examine the different surface features in their selected regions.

Each Grail spacecraft is equipped with four cameras, one pointed forward at a 60 degree angle, one pointed behind at the same angle, and two that are positioned to look straight down at the moon's surface, Hubbard explained. [Video: Grail's Mission to Map Moon Gravity]

The MoonKAM project is aimed at raising public awareness about lunar science, and specifically aims to inspire the nation's youth to study science, math and engineering, she said.

The roughly 80-day MoonKAM project will operate over the course of Grail's three-month mission. And while the mission's science objectives take priority, Grail's program scientists are expecting to be able to provide valuable images for public outreach and education, said Maria Zuber, Grail principal investigator at MIT.