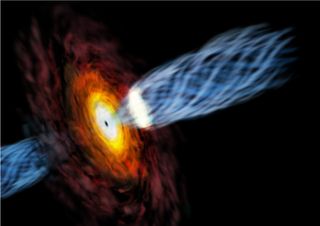 This artist's illustration depicts scientists' new understanding of the giant black hole at the core of galaxy M87. The bright radio 'core' of the jet base is located very close to the central black hole no larger than about 10 times the size of the event horizon.
(Image: © NAOJ/AND You Inc.)

The powerful jets of radio waves that can explode from monster black holes at the center of galaxies may erupt from much closer to these giants than previously thought, scientists say.

Although black holes entrap anything that falls onto them, a vast amount of energy can radiate outward from matter rushing into the black holes. In this way, radio telescopes can spot black holes by the radio jets they can give off.

But the way these radio jets form is uncertain. To uncover their roots, researchersinvestigated a nearby source of them, the black hole at the heart of galaxy M87, a monster about 23.5 billion miles (37.8 billion kilometers) wide and 6 billion times the mass of the sun, study lead author Kazuhiro Hada, an astronomer at the Graduate University for Advanced Studies in Tokyo, told SPACE.com. [Illustration of Galaxy M87's black hole jet]

Using multifrequency radio observations from the Very Long Baseline Array, a collection of radio antennas located at 10 sites from the Virgin Islands to Hawaii, the investigators saw its radio jet was broad between the black hole and the radio jet's brightest part, its core.

The jet then became tightly focused farther out, agreeing with some theoretical models that explain radio jets as the products of twisted magnetic fields within ionized gas swirling around black holes, astrophysicist Alan Marscher, director of the Institute for Astrophysical Research at Boston University, who did not take part in this study, told SPACE.com.

Unexpectedly, the scientists found the radio jet's core lay within a hundredth of a light year of the black hole. This is hundreds to thousands of times closer than estimates of the distance between radio jet cores and black holes in objects called blazars, more-luminous cousins of M87.

The radio jet core might seem much closer to the black hole in M87 than in blazars for a number of reasons.

Typically, the jets of the blazars we see are pointing towards us, while M87 has one that is not pointing directly at us. As such, when it comes to blazar radar jets, perhaps we only see their ultra-fast spines, the parts of the jets that move at 99 percent of the speed of light, rather than relatively slower regions of theirs closer to black holes, which travel at about 90 percent the speed of light.

In contrast, with black holes such as that in M87, the spines are relatively dim, allowing us to see this slower region. Future research to unveil what happens at the edges of black holes will benefit strongly with next-generation space and ground telescopes that can directly image matter falling onto black holes

"It will be a precious holy grail for modern science," Hada said.

The scientists detailed their findings in the Sept. 8 issue of the journal Nature.