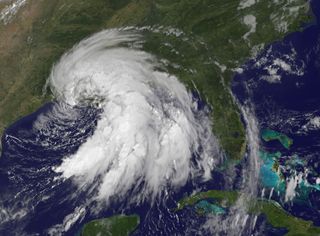 This visible image of Tropical Storm Lee was taken from the GOES-13 satellite on Saturday, Sept. 3 at 9:32 a.m. EDT. It shows the extent of Lee's cloud cover over Louisiana, Mississippi, Alabama and the Florida Panhandle. The clearing on the southeastern side is a result of drier air moving in and preventing development of thunderstorms.
(Image: © NASA/NOAA GOES Project )

The photos, taken by NASA's Aqua satellite and the NOAA's GOES 13 weather tracker were snapped at different times today (Sept. 3), revealing the intensity of Lee's severe thunderstorms and rainfall, NASA officials said in an update.

"Because Tropical Storm Lee is a slow moving storm and still hasn't made landfall despite its close proximity to the coast, it will continue to be a huge rainmaking storm," wrote NASA spokesperson Rob Gutro, of the Goddard Space Flight Center in Greenbelt, Md., in a storm update. "Lee is moving slowly north northwest spreading heavy rains across the northern Gulf coast today." [Tropical Storm Lee photos from space]

The Aqua satellite snapped an infrared view of the storm for NASA scientists, showing Lee's strongest thunderstorms over Louisiana and the Gulf of Mexico as they appeared at about 3:47 a.m. EDT (0847 GMT).

As of 8 a.m. EDT (1200 GMT) today, Lee was still churning off shore about 15 miles (25 km) south-southeast of Intracoastal City, La., and moving north-northwest. The storm had maximum sustained winds of about 60 mph (95 kph).

Gutro wrote that Lee is expected to pour rain on the states of Louisiana, Mississippi and Alabama for the next three days. It could spawn flash floods for regions in the southern parts of those states, as well as the Florida Panhandle.

"Torrential tropical rains will continue to impact south Mississippi and southeast Louisiana through the Labor Day weekend," the National Hurricane Center warned in an update.

Meanwhile, NASA and NOAA also continue to track Hurricane Katia as it moves across the Atlantic Ocean.

Katia is a Category 1 hurricane with winds of about 75 mph (120 kph). That storm is expected to stay at sea this Labor Day holiday weekend, NASA officials said in a separate update.