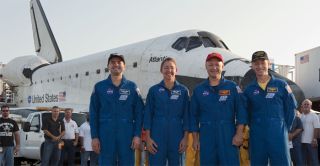 The final space shuttle crew, the astronauts of STS-135, stand with shuttle Atlantis after its landing July 21 at Kennedy Space Center in Florida.
(Image: © NASA)

NEW YORK — Move over Muppets, the astronauts are coming to town. NASA's final space shuttle crew will visit the Big Apple this week for a series of public events to share their experiences of flying on the last-ever flight of the 30-year shuttle era.

The shuttles are being  retired to museums while NASA shifts its sights to planning deep space exploration missions. While in New York, Ferguson and his crew plan to speak to students, museum goers and even the Sesame Street Muppet Elmo, who attended the Atlantis launch last month. [Photos: NASA's Last Shuttle Landing in History]

It's "a good avenue to get the message to the people that, while the shuttle program is over, we still have a space program with the promise of a new and novel route to low-Earth orbit," Ferguson told SPACE.com in an email.

Hurley is a native of New York state, hailing from Apalachin, N.Y. His crewmates have no special ties to the Big Apple, but are excited for the visit, Ferguson said.

It's "always good to check the pulse of the American public when it comes to sending humans to space," he said. "This will be a good opportunity to see what the man-on-the-street thinks."

On Tuesday (Aug. 16), the crew will visit the American Museum of Natural History. They will speak about their recent flight and answer questions from New York City children in the audience in a public event that's free with museum admission.

That night the spaceflyers will also appear on Comedy Central's satirical news show The Colbert Report, with host Stephen Colbert, which tapes in New York.

The next day (Aug. 17), Ferguson, Hurley, Magnus and Walheim will attend a free public event called "What's Your Favorite Space?" at the Eventi Plaza. The astronauts will join Elmo in an area transformed into a miniature space outpost with an inflatable Mars rover, science demonstrations, interactive activities and more. [Sesame Street's Elmo Talks Future with SPACE.com]

And on Thursday (Aug. 18), the crew will speak at the Intrepid Sea, Air & Space Museum. First the astronauts will talk to more than 200 students, then they will meet with the public at two museum exhibits. The Intrepid was chosen recently as the retirement home of the shuttle test prototype Enterprise.

NASA is making a bigger-than-usual push to engage the public with the end of the space shuttle era, and the beginning of its new chapter.

"There has been an increase in the demand for more public events as people want to engage with the last representative crewmembers of the shuttle era — a remarkable legacy and chapter in America's space program," NASA spokeswoman Laura Rochon told SPACE.com. "It's also a chance for the crew to educate the public about the success of the shuttle program, which was key in our building the International Space Station, learning about living and working in space and delivery of scientific payloads for public benefit."

Editor's note: This story was updated to correct the date of the astronaut crew's appearance at the Intrepid Sea, Air & Space Museum, which occurs on Thursday, Aug. 18.