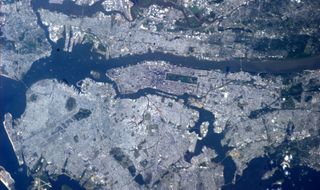 All five boroughs of New York City — Manhattan, Brooklyn, Queens, the Bronx and Staten Island — and the clear skies above them can be seen in this image taken by NASA astronaut Ron Garan aboard the International Space Station on Sunday (July 31).

Astronauts and cosmonauts have a unique perspective of the Earth from their perch on the International Space Station, which orbits 220 miles (354 kilometers) above the planet. While they're circling high above the Earth, astronauts take advantage of the view and snap pictures to share with those of us back on the ground.

A 360-degree window called the Cupola was installed on the ISS in February 2010. It provides astronauts with seven windows from which to snap pictures of their home planet.

The island of Manhattan sits in the middle of this image, with the green rectangle of Central Park clearly visible in its center. Below it in the image lie the boroughs of Brooklyn (to the left) and Queens (to the right). Green blobs marking Brooklyn's Prospect Park and Greenwood Cemetery can also be seen.

To Manhattan's right in the image is the Bronx, while above it sits Jersey City and Bayonne, New Jersey. In the upper left corner is Staten Island. The bridge connecting it to Brooklyn, the Verrazano-Narrows Bridge, can also be seen as a white line between the two boroughs.

Between Manhattan and New Jersey sits the Hudson River, while on Manhattan's opposite site sits the East River.